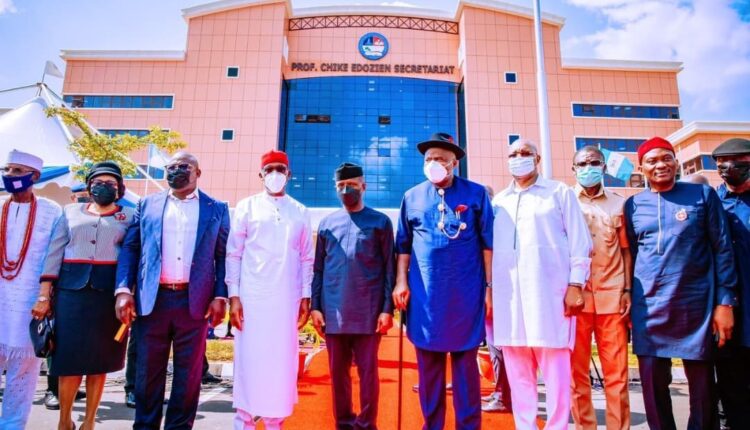 The Vice President, Yemi Osinbajo, has disclosed that efficient civil service is very vital for the running of governance and for quality public service delivery, saying capacity of the public sector was also critical for national development.

According to the vice president, the civil service is the very tip of the spear of governance, and optimal public service delivery requires an efficient civil service.

“Such a public service requires training, and capacity building but also workspaces that are well equipped, conducive, and inspirational. We have heard already how inspired the public servants today are and they are even spending long hours in the office.

He noted that the the seat of the civil service of any arm of government anywhere in the world was usually one of the major monuments enshrining not just the power, but also the splendour of the authority of government.

The vice president, who was received at the Asaba airport by the Delta State governor, Dr. Ifeanyi Okowa, noted at the secretariat that the commissioning was historic, adding that “this imposing complex clearly meets this requirement. In due course, such buildings become historical monuments.”

Osinbajo, who described the new secretariat as a state-of-the-art, functional, and befitting secretariat complex, said it was befitting that the State decided to immortalize the name of one of Delta State’s and Nigeria’s most illustrious sons.

On the essence of building capacity in the public sector, the VP noted that “whether we are talking about the need for more internally generated revenues and greater tax efficiency to compensate for resource deficits, or the management of a public health crisis such as a pandemic, or even the drive for more internally generated revenue, it is the capacity of the public sector that is invariably at issue,” Prof. Osinbajo added.