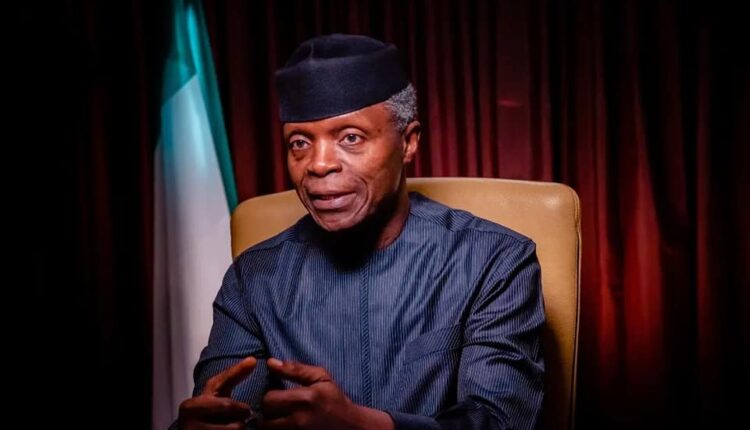 Vice President Yemi Osinbajo has disclosed that to tackle terrorism and climate change across the African continent, there was need for leaders across the region to work in unison and exploit their relationship with the international communities for the benefits of the people.

He noted that there are giant strides recorded across Africa but there are still challenges to overcome for which reasons the leaders need need partnerships that help to tackle climate change, address security concerns, promote economic prosperity, combat disease and improve governance.

Osinbajo stated this in a special address delivered at the virtual edition of the 2022 World Economic Forum featuring leaders from across the world on Friday. The vice president was chosen to deliver one of the 12 special addresses at this year’s event.

The 2022 virtual edition of the forum features a mix of visionary “state of the world” special addresses and ambitious high-level leadership panels focusing on critical collective challenges, among others.

However, Osinbajo listed some of the progress on the African continent, including the recovery from the global pandemic, economic growth by 3.7% last year and a projected 3.8% growth in 2022.

He also noted that there is now in place an African Continental Free Trade Area agreement to fast-track economic transformation just as the continent is making giant strides in agriculture, manufacturing and digital technology.

Osinbajo who spoke on a wide range of issues noted that it was time for the international community to “walk the talk” by meeting its commitments towards advancing growth in developing economies, especially climate changes obligations.

On the issue of peace and security, the vice president said that “African countries face a serious threat of terrorism arising from the encroachment of global terror groups and their franchises into Africa.

“It is imperative for the international community to make more robust interventions to clear terrorists from Africa just as it did in the Middle East and other parts of the world. The United Nations Security Council must find unanimity in working with and assisting African countries to eradicate the menace of terrorism in the continent once and for all.”

On the climate change challenge, Osinbajo noted that “it is now common knowledge that Africa contributes least to climate change but has been most negatively affected by it. We must not allow this worrying situation to be compounded further by global inaction, processes and rules that make it difficult for Africa to adapt to climate change or indeed to develop.”

He then urged “the international community to meet its pledge recently re-affirmed at COP-26 of providing $100 billion annually in climate finance to support climate change efforts in developing countries.”