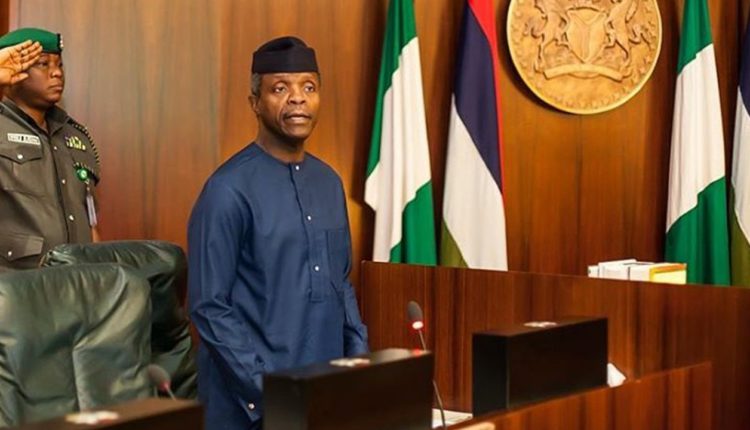 Amid report on crisis, Vice President, Yemi Osinbajo on Thursday presided over the monthly National Economic Council (NEC) at the State House.

The NEC meeting, held monthly, deliberates on the coordination of the economic planning efforts and economic programmes of the various levels of government.

Laolu Akande, the Spokesperson to Prof. Osinbajo, noted that state governors, the Central Bank of Nigeria governor and some members of the Federal Executive Council were in attendance.

“Vice President, Yemi Osinbajo is now presiding over the monthly National Economic Council, NEC meeting with state governors, CBN governor and some members of the FEC. NEC is the constitutional body that advises the President on the coordination of economic affairs of the Nigerian federation,”Akande tweeted.

He explained that NEC under the leadership of Prof Osinbajo between 2015 to April 2019 passed 173 resolutions in 38 meetings, adding that some of the resolutions include the approval of $650 million seed funding as the Federal Government established Presidential Infrastructure Development Fund.

According to him, NEC also approved Community Policing in Nigeria as well as synergy among security agencies in a bid to improve intelligence gathering and end internal security crises which included kidnapping.

“The Council approved the National Transformation Livestock Plan (NLTP) which was launched by the Vice President in Adamawa on September 10. NEC under Osinbajo’s leadership approved Micro, Small and Medium Enterprises (MSME) clinics to help MSME with loans, materials and to make the process of doing business easy,” Akande stated.

NEC, which is the constitutional body that advises the President on the coordination of the economic affairs of the country, comprises the 36 state governors, the governor of Central Bank of Nigeria, minister of finance, Secretary to the Government of the Federation and other government officials and agencies whose duties hinge on the economy.

This meeting is the second since the inauguration of President Muhammadu Buhari’s cabinet for the second term.

Buhari, Atiku depart for US