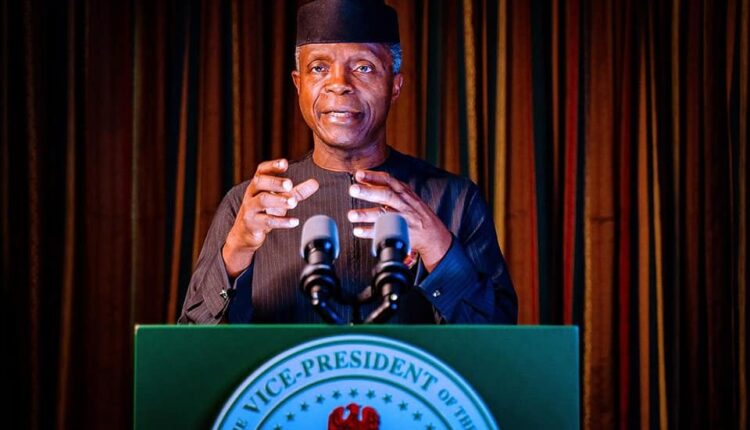 Vice President Yemi Osinbajo has attributed the deepening inequalities, extreme poverty level among Nigerians to the outbreak of coronavirus, saying the pandemic accompanied effect has taken negative toll on businesses and enterprises of Nigerians further pushing Nigerians into the poverty threshold.

He argued that in the face of inequalities in wealth and opportunity worsened by the COVID-19 pandemic, impact investing – an approach that integrates society’s social and environmental goals, can no longer be ignored.

According to the Vice President, glaring inequalities of wealth and opportunity in the face of poverty, misery and social alienation in any society is asking for trouble. Such a situation is neither sustainable nor wise.

Osinbajo made the observation on Tuesday in a keynote speech delivered virtually at the 4th Impact Investors’ Foundation Annual Convening on Impact Investing. “The sharp drop in standards of living caused by COVID-19-induced shocks to the economy have not only further deepened existing inequalities, but pushed many more into extreme poverty.

“Neither governments nor businesses can afford to ignore the huge social disparities and environmental deterioration for long. So, impact investing is an eminently sound approach to balancing these inequities by catalyzing social and environmental impact for long-term structural change,” Osinbajo was quoted as saying in a statement by his spokesman, Laolu Akande.

He explained that “profit and sound social and environmental benefits can co-exist and governments can be facilitators of impact investment.” Continuing, Osinbajo noted that “but because the logic of the profit motive as being the driver of innovation, wealth creation and growth is unassailable, the real question is how to ensure that it accommodates a moral compass.”

Advocating the growth of impact investing in Nigeria, the VP further explained that “a more sustainable business model is intentionally building into the profit making objective, the means of attaining society’s social and environmental goals. The notion of doing well by doing good, or harnessing the forces of innovation, entrepreneurship, private capital to achieve both profit and social and environmental good.”

“Some of the current models of impact investing we are seeing are not only inspiring but also point in the general direction that policy and regulation should go,” the Vice President added. Citing examples in both public and private sectors, the VP noted that “there is an opportunity for collaborative thinking between government, the impact investing community and other stakeholders on policy and regulations.”

However, the vice president submitted that “there is a great deal that is possible in impact investing, but there is a long way to go from the relatively random investment landscape we have now to a more orderly space where government regulations and incentives are carefully worked out with stakeholders.

“The point in the spectrum occupied by impact investors between Not-for-Profit Environmental Social and Governance (ESG) and For Profit entities is still essentially virgin.”