Following Federal Government ban on operations of American microblogging and social networking service, Twitter, the Vice President, Prof. Yemi Osinbajo, and some of President Muhammadu Buhari’s aides as well as other public officeholders have begun to switch from the app to its Indian alternative, Koo, after disengaging their accounts on the platform.

Aside from Osinbajo, others have started posting comments and videos of the President, Ministers, and other Ministries, Departments, and Agencies (MDAs) activities using the platform to disseminate information and enlighten Nigerians on the government activities across the country.

Also, many Nigerians have started switching to the Indian app designed to resemble Twitter but with a different logo, a yellow bird, that differentiated the app from its American contemporary.

On the Indian app, The Guild gathered that the Nigerian government now has a verified account (@Nigeriagov) where it had started putting out regular official government activities and has written over 20 posts and the handle was currently been followed by over 23,000 people less than one week after joining the platform.

Although Osinbajo was yet to post comments and videos, the account already has 26 followers that were already waiting to get updates as it drops while Shehu’s account (@GarbaShehu) had garnered 195 followers with two posts and follows one user.

While other individuals may be struggling to garner influence as they had while on Twitter, Ahmad, the president’s aide on new media, was already getting closer to hit the 10, 000 followers’ mark about six days after he deactivated his account after the ban.

The Koo cofounder, Aprameya Ramdhakrishna, who took to Twitter to announce the Federal Government’s arrival on the application, described the government’s arrival as an indication that the social networking platform had started getting global recognition.

According to him, A very warm welcome to the official handle of the Government of Nigeria on @kooindia! Spreading wings beyond India now 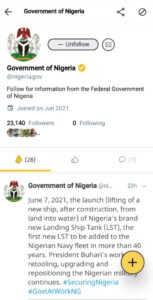 These came barely hours after the apex government rejected Nigerians and diplomats’ appeal to lift the indefinite ban placed on Twitter operations after the microblogging platform pulled down President Muhammadu Buhari’s comments and Videos on the Nigerian Civil War that ended 50 years ago.

Also, it came hours after the Minister of Information and Strategy, Lai Mohammed, hinted that Twitter had reached out for dialogue and insisted that all social media platforms operating across the country would be compelled to pay taxes into government coffers.

The Indian app, Koo, owned by a tech firm, Bombinate Technologies, had been touted as India’s alternative to Twitter, after it was founded in March 2020, following the American firm’s face-off with the Asian country’s government.

Koo currently has over 6 million users in India and a number of influential politicians as well as Bollywood artistes Kangana Ranaut, whose Twitter account was suspended last months, have joined the platform to reach out to their fans.