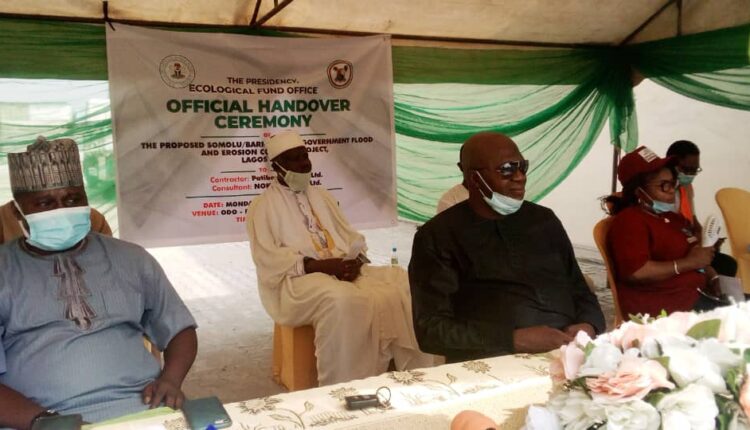 The Vice president, Prof. Yemi Osibajo, and the lawmaker representing Shomolu Constituency II, Rotimi Abiru, have flagged off the reconstruction of the 10 roads approved by the Federal Government under the Ecological intervention fund.

The roads flagged off for reconstruction by the vice president and the lawmaker include Kukoyi Street, Olaiya Street, Ajagbemokeferi Street, Ayoola Lawal Street, Abeokuta street, Oyenaiya Street, and Unity Street.

At the short ceremony, Osinbajo appealed to Bariga residents to monitor the projects and cooperate with the contractor to ensure its actualization within the stipulated time frame for the project.

The vice president, who was represented Olasupo Kazeem, congratulated the people of Bariga for being among areas in the country considered by the Presidency for Ecological Fund projects.

Abiru, while speaking on the project tagged, Somolu/Bariga local government Akoka/Ilaje Community, Akoko-Lagos Flood, and Erosion control projects, stated that the project would end flooding challenges within the axis.

According to him, the World Bank report put Bariga area as one of the worst erosion affected areas in Lagos and the challenges are beyond state or local government.

“The efforts to control the erosion problem started over two years ago through the office of the Vice President and we are grateful today that lasting control measure to the menace has come to reality”, he added.

Abiru, however, appealed to Community Development Association (CDA), the people of Bariga, market men and women, and particularly the youths for cooperation and support for the contractor towards monitoring the project for quality delivery.

The lawmaker, who commended President Muhammadu Buhari and the vice president for considering his constituency worthy of the projects, disclosed that the second phase will address other erosion problems within the Shomolu-Bariga area of Lagos.

He assured the people of Bariga that the project will not be abandoned and sought the cooperation of communities in the area.

The representative of the office of ecological fund projects, Emily Ogunmoroti, congratulated the people of Bariga assuring them of the Presidency’s commitment to the successful completion of the project in the Bariga area Lagos State.

The representative of the Community Development Association (CDA), Babatunde David-Idimu also thanked the Presidency for responding to erosion challenges in Bariga area while also appealing for compensation to property owners for any loss of their properties in the course of the projects.

Rivers Gov. fixes January for another lockdown after COVID-19 spike