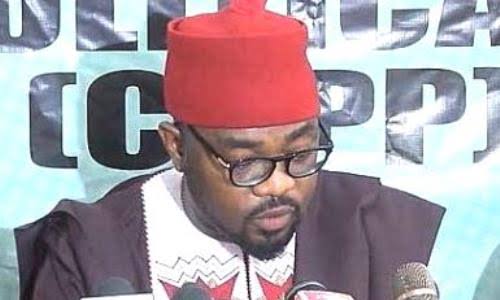 The Coalition of United Political Parties (CUPP) has rejected the Federal Government proposed plan to invite a Chinese medical team into the country, with aim to aid the nation in its fight against the novel coronavirus pandemic within its borders.

It explained that the move showed government lack of confidence in ability of Nigerian doctors and other frontline medical health workers who had, so far done a good job in control of the pandemic situation, and who risked their lives daily despite the huge constraints faced in their fight against the global pandemic.

The opposition parties coalition  said it was surprising to note how the President, Muhammadu Buhari, undermined sacrifice by health workers in their daily battles against the deadly disease, by taking such drastic decision without due consultation or recommendations from bodies like the Nigeria Medical Association (NMA) before announcing its plan to import Chinese doctors.

Spokesperson of the body, Ikenga Ugochinyere, through a statement released on Monday, stated that considering challenges faced by Nigerian medical personnel in discharge of their duties, it was in poor taste to pass a vote of no-confidence on such workers at such as time by inviting experts who had yet to rid their country of the deadly infection.

He noted that according to legal provision of the Nigeria Dental and Medical Council Act, such decisions should have passed through the council and approvals received by government before such plans as were being proposed to bring in foreign medical doctors to see Nigerian patients, were decided on.

“We ask the Presidency, why did the government not work with our Nigeria Medical and Dental Council in line with the provisions of the law before coming to the ill-timed decision to import Chinese doctors? We stand with the Nigerian Medical Association that has rejected this move and indeed all Nigerians should reject the move.

“The arrival of Chinese doctors in Italy unfortunately coincided with the spike in the contracting and death rate in that country which made it to soon be the country with the most deaths. It could be a mere coincidence, but since the spike, what have these Chinese doctors done to improve situations in Italy with the thousands of deaths that have occurred since then.” the statement said.

The opposition parties maintained that the proposed importation of Chinese doctors as announced by the Presidency is dangerous, in violation of the law, and would constitute a distraction from the good work being done by Nigerian health workers.

“Let the world hear us clearly, Nigerians do not need the Chinese doctors’ physical presence. There are technological means like tele-conferencing, skype and all other types of video calls in use in the medical field where doctors thousands of kilometres away are consulted to review and give expert advice on patients’ cases. Nigeria must leverage on such technology at this time.

“Nigerians will have no options but to hold the President personally responsible if he forces these Chinese doctors on citizens and the situation gets worse or there are messy reports about unapproved action by the doctors,” the statement added.

The opposition parties, however, urged the government to provide neccesary assistance and facilities for the Nigerian health workers to aid their fight against the virus, rather than passing a vote of no confidence on them with an ill-timed move to bring in Chinese doctors.