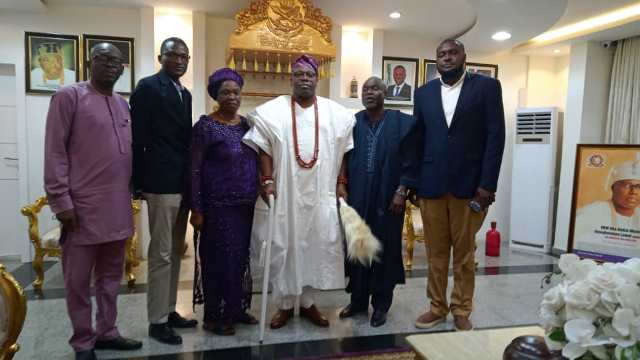 The Oniru of Iru Land, Oba Gbolahan Lawal, and the Building Collapse Prevention Guild (BCPG) have disclosed that they would be joining forces to curb rising spate of building collapse on the Lekki axis, and other areas across Lagos State.

They said that the partnership had been formed to checkmate construction infractions on the axis and prevent avoidable loss of lives and property of residents.

The Oniru who listed the team of built environment professionals who managed the Oniru Family Estate, measuring about 230 hectares with over 1,000 houses, urged the Guild to work with the team.

Speaking yesterday when the newly elected executives of the Lagos State Chapter of the Guild paid a courtesy visit on his palace, the monarch said that his experience as a former Commissioner for Housing in Lagos came to bare in his desire for partnership with the BCPG.

He recalled his robust working relationship with the the BCPG Founder and Pioneer President, Kunle Awobodu, training artisans and carrying out other innovative schemes that yielded positive results.

The traditional ruler mentioned various initiatives and collaboration with relevant agencies of the state government toward enforcement of building regulations in the Oniru Estate as well as infrastructure development drive in the area.

Awobodu who led the BCPG delegation, listed building collapse that caused national embarrassment including the 21 storey building on Gerrard Road, Ikoyi, close to the palace which occurred, November, 2021.

“If a house is well built, there is no fear of emergency; anticipating whether there will be collapse or not, so, people will not suffer in their sleep. We were trained in building construction. If we are well trained, then should Nigerians be facing this perennial disaster that has damaged our image across the world?” he asked.

Awobodu called for collaboration of the Oniru and other traditional rulers on the axis to be able to avert the danger of future building collapse. He appealed to the traditional ruler to speak with the King of Ikate Elegushi, Oba Saheed Elegushi and others to adopt measures against quacks breeding infractions.

“From this area to Lekki there are many developers and our experience with them, I will quickly share with Kabiyesi, so that Kabiyesi Elegushi and the others will now look at how they can work with us.

“The developers here, some of them were formerly traders at Alaba who are now into construction. In this axis, we really need to work with the Ministry of Physical Planning and Urban Development and professionals like BCPG to see how we can reduce the havoc these people are creating,” he said.

Awobodu cited example of how collaboration with a traditional ruler in Yaba in the past was able to curb building collapse on that axis.

On his part, the BCPG Lagos Chapter Chairman, Col. Olajide Olayinka Retired, said that plans for Dangote to go into block-making to regulate issues of mixing ratio should be complemented with engagement of professional builders on sites.

Olayinka said that sometime, developers did not use the survey plans approved for the actual construction, hence, the need for supervision by professionals. He said that project boards must give accurate information on professionals working on the projects with their contacts listed in line with global standards to check infractions.