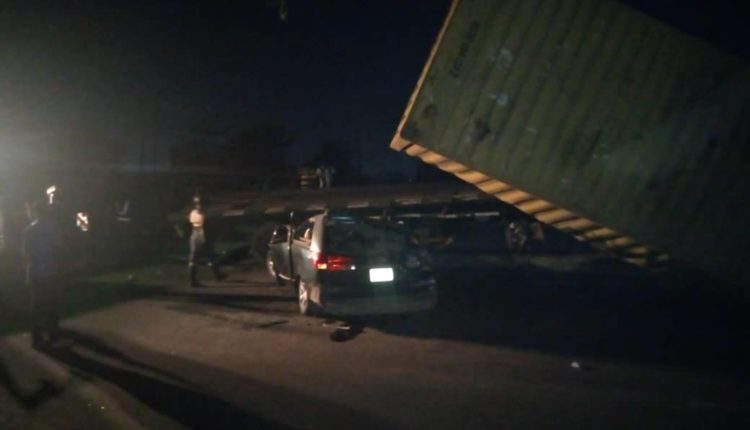 Atleast one person has been confirmed dead and others injure during a multiple road crashes on Apapa-Oshodi Express Road in Lagos State.

The multiple accident on Friday morning took the life of an assistant driver of  a private tow truck occurred while fixing the tow truck after it broke down along the Apapa-Oshodi Express Road, inward Oshodi.

It was learned that the driver and his late assistant were still repairing the truck when another articulated truck conveying two 20feet containers, which was on motion, suddenly developed mechanical problems, had brake failure and rammed into the parked tow truck and the towed vehicle.

The multiple accident which claimed life of the truck assistant instantly, also left the towed Sienna completely damaged, after the two units 20feet containers fell off from the articulated truck conveying it and landed on the other vehicles crushing it.

Confirming the tragedy, Lagos State Emergency Management Agency (LASEMA) Public Affairs Officer, Nosa Okunbor, in a statement on Friday, disclosed that the vehicles have been evacuated from the road to prevent further crashes.

He said: “Information gathered at scene of the incident by LASEMA Response Team, revealed that the accident involves a truck with number plate APP 444 XV conveying twin 20fts containers and a Toyota Sienna Bus with number plate SMK 22 AV which was being towed by a private tow truck with an unknown number plate.

“Further investigations revealed that the tow truck broke down along the above mentioned corridor and efforts was being made by the operators to fix it before the truck, which was on motion, suddenly had brake failure and rammed into the tow truck and towed vehicle.

“Unfortunately, the two containers fell off the truck and landed on the Toyota Sienna and the tow truck, leaving the motor boy of the truck dead at the spot and damaged the Sienna beyond recognition.