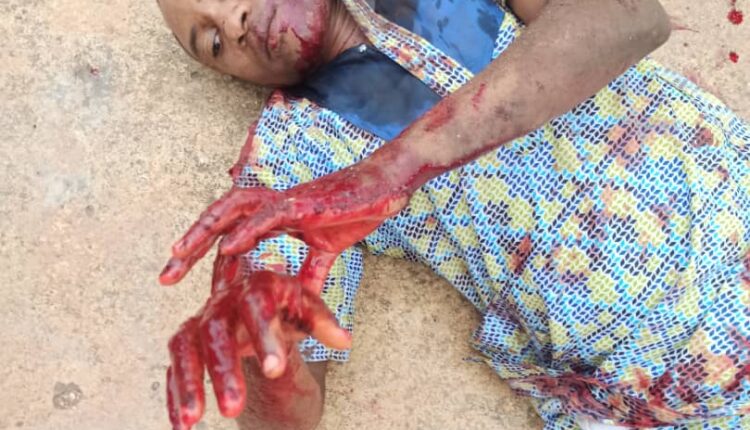 No fewer than one person was reported to have been killed and another injured during hoodlums attack on Ijede Local Council Development Area (LCDA) chairmanship aspirant, Oluwatosin Onamade’s office in Lagos State.

The hoodlums, who were reported to have killed 54years old Ifeanyi Etunmuse, and injured the aspirant’s younger brother, Oluwafemi Onamade, perpetrated the act during the attack at the office, Western Cemetery, in Abule-Eko axis of the council.

As gathered, after the attack, the thugs also vandalised property within office of the aspirant, who aimed to contest on the All Progressive Congress (APC) platform, before leaving the scene with blood stains of the victims seen on the floor.

Speaking on the attack, the chairmanship aspirant, Onamade, yesterday noted that after the attacks on Friday, his 38years old brother, who was admitted at the Ijede General hospital, after sustaining gunshot wounds was transferred to another hospital after news filtered in that plans had been concluded to launch another attack on the medical facility particularly on him.

The chairmanship aspirant, meanwhile, appealed to President Muhammadu Buhari and the State Governor, Babajide Sanwo-Olu, for intervention to end the persistent attacks on him, relatives, and staff within the council.

He said: “I want to appeal that the president and the governor consider him as the law-abiding citizen and intervene in the case so as to reduce more bloodshed and save lives.

“I was attacked personally by a lot of thugs who threatened to kill me when they started vandalizing my Chairmanship posters at the local government with warnings to shelve the plans about six months ago.

He appealed to the federal republic of Nigeria and the State government to come to his aids at this point that series of petitions had been sent to the Department of State Security (DSS) and the Lagos State Commissioner of Police, Hakeem Odumosu, over the attacks.