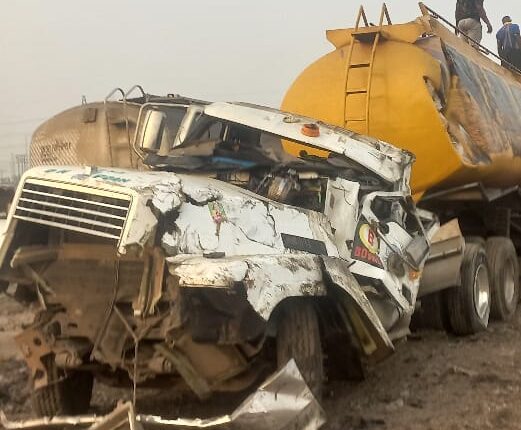 Share
No fewer than one person has been reported dead and another sustained varying degrees of injuries when a tanker fell on a stationary towing van along Apapa-Oshodi expressway in Lagos State.
It was gathered that the accident occurred when the truck was trying to maneuver barriers introduced for toll collection activities along the road.
The Director, Lagos State Fire and Rescue Service, Adeseye Margaret, who confirmed the casualities figure on Sunday, disclosed that the tragedy occurred at Otto Wharf bus stop end of the road.
According to her, the incident, which was reported at 04:02, Sunday wee hours, has a 45,000 Litres tanker heading towards Oshodi from Apapa where it loaded AGO also known as Diesel to full capacity before it was reported to have fallen on a stationed towing van while on motion, negotiating it’s way out of barriers introduced by nefarious tolls collector activities.
“The resultant accident, which was mitigated by the Sari-Iganmu Fire Crew of the Agency from resulting in a fire outbreak and secondary incident, however, left two males adults involved as one was rescued alive with varying degrees of injury to the hospital and the other recovered suspected dead.
“The evacuation of the remains of the tanker and towing van carried out with any atom of further danger completely averted to bring the operations to a logical conclusion”.