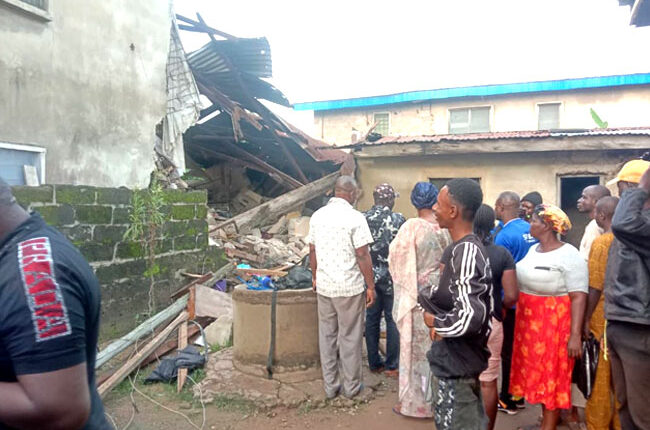 At least one person have reportedly died and scores of others trapped in a rubbles after a building in at Fanibi area of Akure, the Ondo State capital, partially collapsed.

The building which collapsed on Tuesday morning killed the victim said to be an 80-year-old elderly woman occupying one of the apartment.

As gathered, the deceased remains had been deposited at a morgue in the town while residents of the area had commenced rescue operation for those still trapped in the building.

Confirming the development, one of the children of the 80-year-old deceased grandmother, Pastor Benson Olom, blamed his mother’s death and collapse building on the property owner, adding that the landlord tampered with the building with his plans to reconstruct the ground floor to flats from room and parlour.

He also clarified that his wife and five children were the occupants trapped in the rubbles and that they escaped death by whisker during the incident that occurred at about 3 am.

According to him, my family members were rescued with injuries after hours of rescue operation by residents of the area and sympathizers because we are the ones occupying a two-bedroom flat upstairs.

”l warned him that reconstructing the building or tampering with it could affect the who building but he refused to listen. All he was after was to make more money after reconstructing the room and parlour to flats forgetting that it’s an old building with weak beams.

”Myself, wife and our four children escaped unhurt only one of my children sustained a head injury and has been taken to the hospital,” he said.