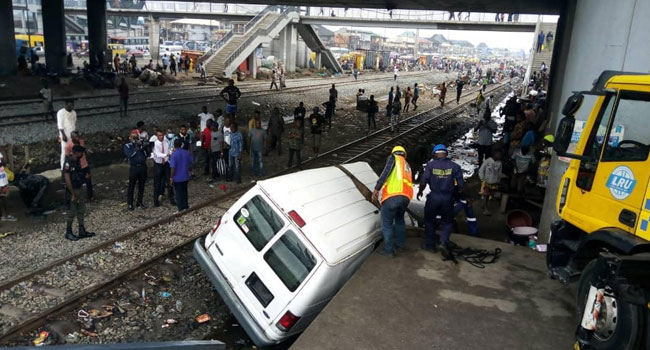 One passenger died, six injured during  an overhead collision between a bus, highlander jeep and commuter train at PWD inward Oshodi, Lagos.

It was discovered that a passenger motor GGE 972 GE with six passengers had veered onto the train tracks while crossing the rail at PWD inward Oshodi and subsequently collided with a scheduled commuter train.

The two vehicles were then dragged along for a stretch of the journey before the train managed to come to a complete halt.

Confirming the accident, the Director-General, Lagos State Emergency Management Agency (LASEMA), Olufemi Oke-Osanyintolu, said the bus with six passengers suddenly veered onto the tracks and collided with the train.

Acoording to him, the agency received distress calls at 8.12 am regarding to the subject matter and upon arrival at the scene,  it was discovered that many passengers were injured and one found dead as a result of degrees of injuries inflicted on him.

The LASMA DG explained that the agency was able to successfully extricate a total of eight passengers, six with minor injuries were provided with on-site medical care while two males including a 20-year old sustained severe injuries and were taken to LASUTH for further treatment.

“The accident vehicles were recovered off the road with the aid of the Agency’s Light rescue equipment while traffic management measures were put in place by the emergency responders, alongside taskforce officials and Nigeria Police”

“Members of the public, especially drivers of commuter buses are advised to obey traffic regulations to prevent loss of life, injuries, and transport delays.” He warned.