JUST IN: Two workers die, over four others trapped under…

One die, 134 cars crash during snowfall in Japan

By News Desk, with agency report. 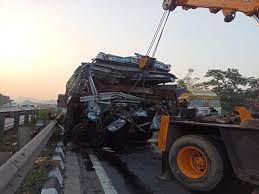 At least one person was confirmed dead and several others injured after 134 cars were involved in a series of crashes in Japan on Tuesday when a snow storm struck a stretch of highway.

As stated, the crashes occurred on the Tohoku Expressway in the northern prefecture of Miyagi at around noon, on a stretch of road about 1 km (half a mile) long.

Confirming the development, the Japanese disaster management agenc said that now fewer than 200 people were caught up in the crashes while 12 of them were in critical condition and receiving treatment at the hospital.

Briefing newsmen, Japanese Chief Cabinet Secretary, Katsunobu Kato, said that rescue operations were underway and that first responders are the scene of incident to ascertain the level of damage.

He hinted that the relevant authorities had earlier imposed a speed limit of 50 kph (31 mph) when heavy snow cut visibility but that was not enough to prevent disaster.