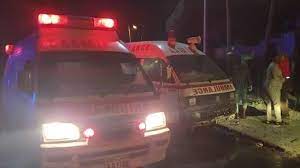 Four teenagers, an infant, and one other were reported to have died and several other residents injured when a suicide bomber detonated his vest in Mogadishu, Somalia’s capital.

As gathered, the suicide bomber, who also died, blew himself up near a busy restaurant in Mogadishu’s Shangani district, halting commercial activities within the axis.

After the attack on Saturday, the police spokesperson Sadaq Ali, who confirmed the development on Saturday, describing the actions of the Al-Shabaab as barbaric.

Ali said: “At around 19:00 tonight, a suicide bomber blew himself up at a tea party gathering young people. The casualties are 6 dead (4 teenagers, 1 infant, and suicide bomber) and 4 others injured”.

Shangani is a high-security area of the capital that houses the ministries of internal security and sports and youth affairs.

A police station is also located near the area where the bombing occurred.