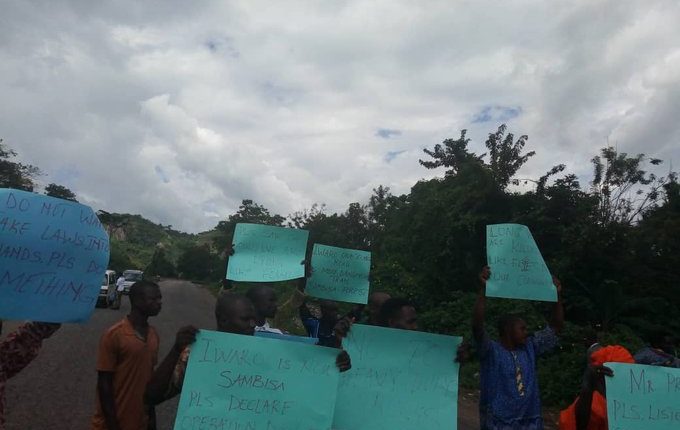 Activities on Oka-Akungba road in Ondo State have been paralysed by residents of Iwaro-Akoko, in the northern senatorial district area of Ondo State, protesting against use of their community roads by articulated trucks.

The residents, who barricaded the road to prevent vehicular movement, lamented that number of lives and worth of property lost to articulated trucks related accidents have continued to increase geometrically.

Defying the scorching sun to express their grievances on the tragedy that had continued to befall the community, the protesters demanded that trucks desist from using until Federal Government repair the road.

The protesters lamented that due to the topography of the area, heavy -duty trucks often lost control and veer off the road, to kill residents in their houses and shops in the town.

According to the protesters, hundreds of people had been killed from various forms of accidents caused by the trucks in the community.
They argued that aside deaths, the worth of property destroyed during these accidents cannot be quantified, saying, over two decades now, no one has consider reconstruction of this road.
It was learned that the residents had written to the State Governor, Oluwarotimi Akeredolu, on the need to urgently reconstruct the road.
They stressed that to reduce pressure on Oka-Akungba road, Government should construct alternative roads from Iwaro, through Oke Oka Isua, for the articulated trucks.
The Guild learned that efforts by officers of Federal Road Safety Corps (FRSC), to appease the angry protesters could not yield any results.

To assist travellers reduce time spent on the road, FRSC Oshogbo said: “We have created emergency diversion at Akungba and Isua junctions to diffuse the traffic jam occasioned by the blockage.

“This action was also taken to avert clash between the protesters and the motorists and also to ensure free flow of traffic along the alternative routes”.

“Police and some eminent personalities in the community have also been contacted for intervention to prevent escalation.

“Also, the Nigeria Army detachments at Ikare and Isua have been informed and their men have been deployed to the scene”.