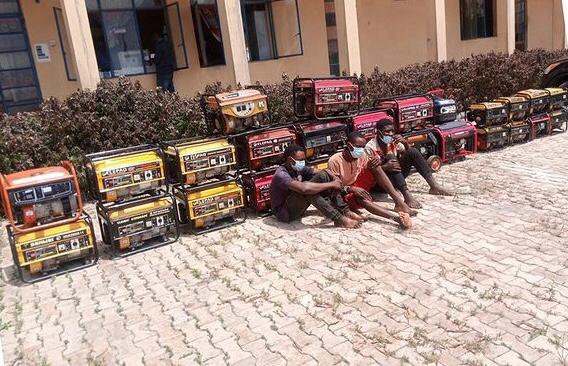 The Ondo State Police Command has arrested a 26-year-old dry cleaner, Opeyemi Tosin for allegedly stealing no fewer than 26 generator sets from different victims in Akure, the Ondo State capital.

As stated, the suspect was arrested alongside two other suspected thieves, ThankGod James, 22, and Sodiq Segun, 23 who specialized in stealing generators from various homes in the capital of Ondo State, Akure.

It was gathered that the three suspects were arrested after stealing a generator from one Akindele Olumide at Adedibu Street, Okuta-Elerinla, Akure, leading to the recovery of 25 other generators.

While revealing how he stole the items, the prime suspect, Tosin, said he usually breaks into people’s homes to steal generators, while his accomplice finds buyers for the stolen generators.

The dry cleaner turned generator thief said the stolen generators were usually sold to unsuspecting members of the public with fake receipts printed by him and backdated to the sales of the generators.

While admitting to the crime, he said, “I usually monitor the homes of customers with big generators and I will devise means to steal the generators from their homes.

Speaking on the theft of the generators by Opeyemi, the state Commissioner of Police, Bolaji Salami, while parading the suspects on Wednesday, said 26 generators were recovered from those the suspect had sold them to, adding that the suspect had been a serial burglar.

The state Commissioner said that following “a report of stolen generators from one Akindele Olumide of Adedibu Street, Okuta-Elerinla, Akure. The Ondo State Police Command swung into action and recovered 25 other generating sets from one Opeyemi Tosin ‘m’ age 26 years of Okuta-Elerinla Estate, Akure.”

He said “Police investigations revealed that Opeyemi Tosin is a serial burglar and has confessed to the offence. “He has also named two others as his accomplices. They are, ThankGod James, ‘m’ age 22 years and Sodiq Segun ‘m’ 23 years and the case is ready for prosecution.”

Meanwhile, Salami disclosed that three suspected armed robbers who have been terrorizing Akure and its environs have been apprehended by the men of the state police.

He listed the suspects to include, Usman Yakubu ‘m’ age 37 years, Micheal Ali ‘m’ age 34 years, Monday Etim ‘m’ age 25 years, saying they have all confessed to taking part in an armed robbery that occurred on May 6, 2021, at Ogbese, while investigation is ongoing.