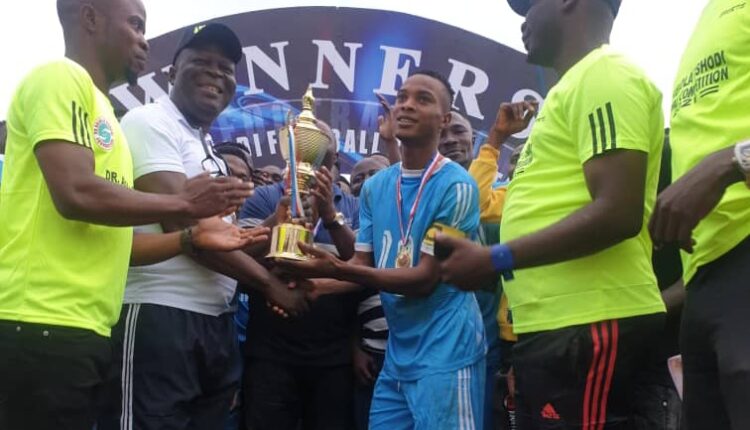 They described the addition of sporting competitions into the existing programmes he had launched for youths in Owo and Ose local government areas as commendable and promoter of peace and harmony.

The Canadian-based Nigerian medical expert was commended yesterday during the final of this year’s edition of his football competition won by Real Ifon Football Club (FC) of Ose after defeating Emalex FC of Owo with a lone goal while 3rd place was won by Owomade Metropol FC.

Addressing the spectators present at the venue, the monarch, who was represented by Samuel Adewale, said that sports remain a veritable tool to engage youths and discourage them from embracing crimes and other social vices.

Ogunoye disclosed that the importance of sports to peaceful coexistence formed reasons he established Olowo Football Competitions among secondary schools within the kingdom.

Also, the deputy Rector said that the gesture by Oshodi, a Canada-based medical doctor from the town, would go a long way to continuously boost sporting inclination among youths in the state particularly in Owo.

He appreciated the psychiatrist for exploring all means to develop youths in the kingdom especially by paying bursary, awarding schorlarship, and purchasing Joint Admission and Matriculation Board (JAMB) forms for students.

Adelanke said: “I will like to thank our illustrious and industrious son, Dr. Abiola Oshodi for his act of benevolence, philanthropy, kindness, and unparalleled ingenuity.

“With this gesture, he is a community developer, a youth-friendly philanthropist, a silent achiever, an astute and erudite scholar who has pleasure in investing in human capacity building and progression. This will no doubt take them away from the streets and stem down the current wave in social vices and nefarious activities,” he added.

The chairman of Organising Committee, Aliyu Taye, described the event as a great one that brought all and sundry together to compete for the trophies, saying this competition will continue to inspire youths that wish to embrace sports.

Present at the event were His Royal Majesty, Oba Ebenezer Ogunmolasuyi, the Olupenmen of Upenmen land, Chairman of Owo Local Government Area, Samuel Adegbegi, among others.