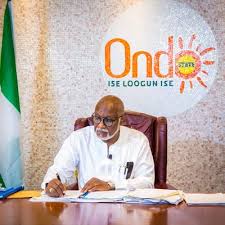 The Ondo State Government has disclosed that it may lift the ban on religious gatherings within the state, saying that the move would reinstate the human rights of residents which had been suspended due to rising incidence of the global coronavirus pandemic in the region.

It said that residents had been denied the rights of worship and association due to the existing ban on religious activities and that the time had come for a possible review of the restrictions across the state.

The State Governor, Rotimi Akeredolu, while speaking with newsmen on Monday, revealed that meetings would be held with various religious leaders within the state, in order to determine the modalities for the resumption of church and mosque activities.

He expressed optimism that the talks would yield a smooth transition process and facilitate a removal of the existing ban on religious gatherings in Ondo state.

Akeredolu stated that the nation was presently faced with uncertain times and added that the people’s right to pray and seek the face of God had become even more pertinent amidst such crisis situations.

“We will do all to ensure freedom, confidence, and prosperity for our people, including the right to seek the face of God at all times and especially at these crucial times,”

“In furtherance to this, the government will be meeting with religious leaders and other stakeholders within the state to explore ways of returning religious worship to our society. We will accelerate such consultations and review and without doubt, the people will hear from me very soon”, he said.