JUST IN: Ministers seeking elective offices to resign ahead… 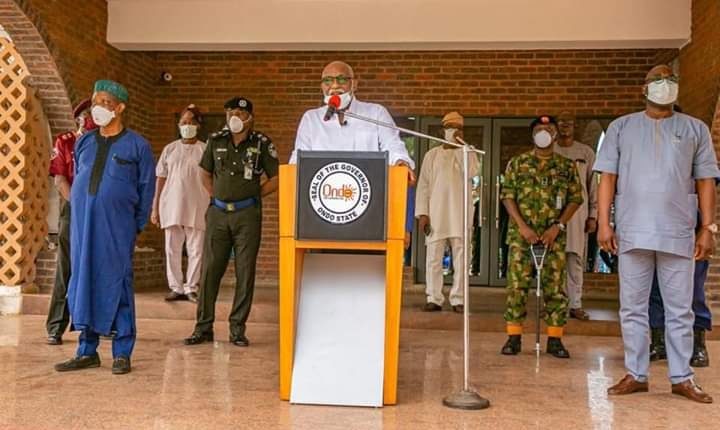 The Ondo State Governor, Rotimi Akeredolu, has issued an executive order, mandating residents to use protective face masks when coming outside their homes or in course of going about their daily duties.

Enforcement of the face mask, according to the governor, would commence on Friday, April 24, 2020, with the aim to curb coronavirus pandemic spread in the state and ensure that people were safe from contracting the viral infection as they go about their daily activities.

Akeredolu revealed that he had directed mass production of face masks and that the coronavirus preventive items would be distributed to all persons in the state, to aid residents’ compliance with the executive order.

The governor, who gave the directives in a statement released on Monday, assured Ondo state residents that the locally produced face masks would be made available in regions of the state ahead of the enforcement date.

Akeredolu added that the face mask order cut across all persons within the state including those on essential duties who were also expected to comply by wearing the protective gear as they went about their activities.

“People involved in essential services or dealing in medicine, water, and consumable items, in particular traders and market men/women should also wear nose masks while outside plying their trade”.

He said that in order to curb inter-state transmission of the global pandemic, Ondo State in conjunction with five other South-Western states had adopted a joint travel ban protocol, through which movement from one state to the other had become prohibited and punishable by law.

According to the governor, the agreement between his state and neighboring Lagos, Ogun, Oyo, Osun and Ekiti states had put restriction on movement across borders, flouting of which directives would lead to arrest and prosecution of offenders.

“Let me make a few clarifications about this. It simply means, the six states are cooperating to make sure that inter-state trafficking of goods and human beings is halted in order to contain the spread of the deadly virus. In simple terms, individuals who violate or disobey the interstate travel ban by attempting to cross the border of one state to the order in the South-western part of Nigeria will be arrested and liable to be prosecuted.”