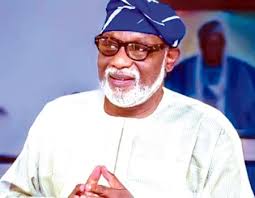 The Governor of Ondo State, Rotimi Akeredolu, has inaugurated a State Palliatives Committee which he mandated to commence planning for provision of alleviation packages for residents of the state with aim to cushion effects of coronavirus pandemic on the people.

Akeredolu explained that the committee would be responsible for working out of modalities, mobilisation of resources and implementation of government support programs towards its people, against the covid-19 infection.

The governor stated that such committee had become necessary due to the economic hardships endured by residents as a result of various coronavirus preventive measures which had been implemented with aim to curb spread of the deadly pandemic amongst people of the state and that it was expected that the committee would facilitate provision of support to the people.

Speaking in a statement released to newsmen on Friday, Akeredolu revealed that the committee would focus on facilitation of adequate food supply to the people as well as other methods of palliative provision for the benefit of state residents.

He said that the nine-man committee, which was chaired by his Senior Special Assistant on Agriculture and Agri-bussiness, Akin Olotu, included members such as Morenike Alaka, Alex Kalejaiye, Morinsola Olanipekun, Abayomi Eniayewu, Roseline Okafor, Jacob Adebo, Festus Aregbesola and the secretary, Tosin Ogunbodede.

The governor expressed optimism that the committee would carry out its mandate competently and that report of its findings would be received in due time.