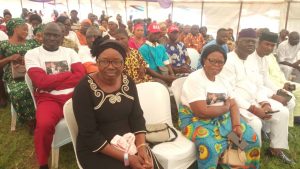 The founder of Synagogue Church Of All Nation (SCOAN), Temitope Joshua popularly called T.B Joshua’s hometown, Arigidi-Akoko, witnessing a beehive of activities including the convergence of council chairmen, traditional rulers, schoolchildren, and others to bid the cleric farewell.

Aside from the chairmen from the three local government areas in Akoko axis, family members, politicians among other dignitaries defied the heavy rainfall to storm his hometown and monitored the burial proceedings. 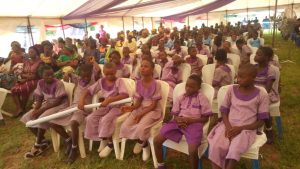 The guests who came from different parts of the state to his hometown joined millions of viewers globally to participate in the burial service held in honour of T.B Joshua, a renowned televangelist, at the SCOAN headquarters in Ikotun, Alimosho Local Government, Lagos State.

At the large area set up for dignitaries, the State Government was said to have fixed large viewing screens and other smaller Television (TV) sets to ensure they do not miss any moment in the burial rites which was also attended by the State Governor, Rotimi Akeredolu and Lagos State Governor, Babajide Sanwo-Olu, who was represented by Commissioner for Home Affairs, Anofiu Elegushi.

The guests, who watched with a keen interest in the proceedings, most of them were not members of his church but had benefited from his philanthropy either directly or indirectly through his outreach programmes across the country.

For the councils, it was learnt that the cleric had assisted them to offset their bills including electricity and connect many towns that had been in darkness to the national grid, donating transformers and other equipment to boost their standard of living.

Not minding the hours the burial service took, the congregation waited and they described the deceased pastor as a special giver whose philanthropic gesture would be missed globally.

In an interview with pressmen, they stressed that the cleric, who died a few days to his 58th birthday, be immortalised by the State Government for his contribution to human development in Lagos and Ondo states. 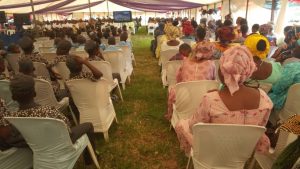