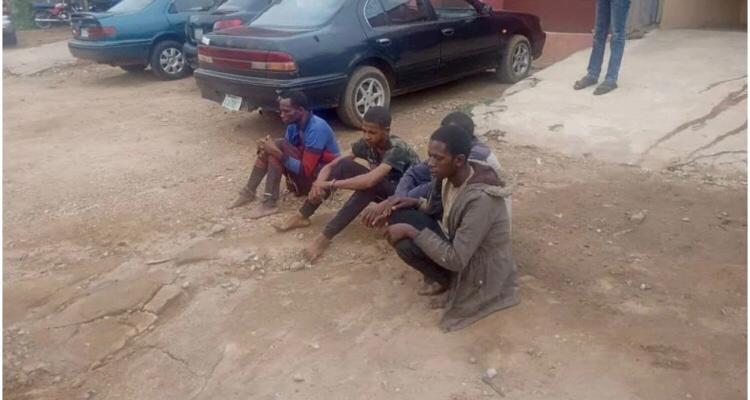 The Ondo Security Network Agency, also known as, Amotekun Corps, has confirmed the arrest of a four-man kidnap syndicate in Akure, the state capital

Amotekun also said that while trailing the suspected killers, three kidnapped victims were also rescued from where they were kept by the kidnappers.

It said the four men syndicates identified as, Usman Garuba, Yameri Muhammed, Umar Ali, and Abubakar Sidiku were arrested at the weekend after the agency received a distress call.

Confirming the arrest, the state’s Amotekun Corps Commander, Adetunji Adeleye, in an interview with newsmen on Monday, said the suspects were apprehended after kidnapping three persons along Oda road in Akure South Local Government Area of the state during a night operation while it was raining.

According to the Ondo Security Network Agency boss, the suspects initially kidnapped four persons, but one person was able to escape while they took the rest of them to their hideout.

Adeleye said after getting wind of the incident, Amotekun operatives swung into action and rescued two persons that night, and subsequently arrested the suspects during negotiations for ransom.

He explained that one of the suspects, Garuba in the course of collecting the money for the ransom, was apprehended by the Amotekun operatives leading to the arrest of three others in their hideouts, while a female victim was rescued.

Adeleye disclosed that the suspected kidnappers confessed to have raped one of the victims while two others were beaten blue-black during negotiations with their family.

He disclosed that a gun,  cutlass, dagger, and a motorcycle were recovered from the suspects. He assured the law-abiding residents of the state of adequate security of their lives and property.

Adeleye said the rescue mission was made possible with the assistance of other security agencies and said, “We were able to rescue two victims that same day but the kidnappers held onto to one.

“We sold a decoy of ransom payment to them and in the course of that we were able to nab one of them who led us to their hideouts and we arrested others.”

He said the four suspects would be handed over to the police for further interrogation and investigation.