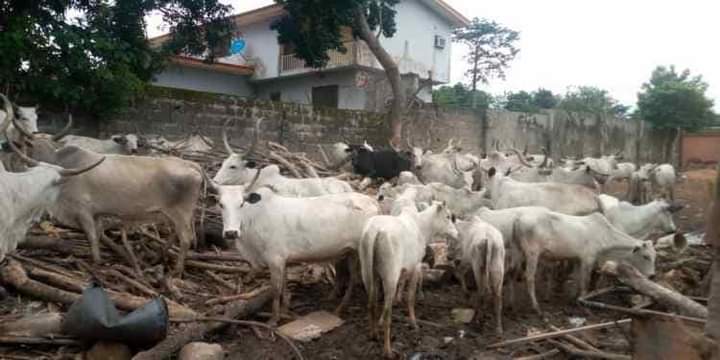 No fever than three herdsmen were reported to have been arrested and detained as well as 40 cows seized by the Security Network Agency codenamed Amotekun Corps for violating the anti-open grazing law in Ondo State.

The herdsmen were apprehended by the Corps after they allowed their cattles to grazed on residents’ farmlands in Owode, Akure South Local Government, destroying crops and other items on the farmland.

Announcing their arrest, state Commander for Amotekun, Adetunji Adeleye, told newsmen on Saturday that they responded to residents and farm owners outcry that herdsmen had invaded farmlands and were destroying crops that were about to be harvested.

Adeleye stated “We got distress calls from farmers and residents of Owode, a community very close to the Akure Airport that cows are persistently destroying their farmlands.

“We went there thrice to educate them on how to do their businesses without destroying other peoples’ farmlands. It got to a time when there was a threat and a new dimension to it which got us into action.

“The cows have been impounded, while three herders were apprehended and detained as investigation is still ongoing,” the Corps Commander added.

Meanwhile, he stated that as part of strategies to curtail crimes in Ondo State during this year’s ember months, the outfit has kicked off a “Massive And Well Coordinated Show Of Force” across the state.

The commander further assured residents that the Corps would continue to ensure safety, reiterating that there would be no hiding place for criminals in the state.

According to him, “the parade was to reassure the people of the security agency’s readiness to take on hoodlums and other elements ahead of the ’ember months’ period, saying the exercise is not meant to intimidate law-abiding citizens.

The Amotekun boss said it will help checkmate hoodlums who might want to take advantage of the ember periods to execute their criminal acts.

“Our gallant men took the campaign round the Akure metropolis while also engaging themselves in a Show of Force.”

The Commander appealed to residents to provide credible and factual information about criminals and their activities within their various domains.

Adeleye enjoined residents of the state to go about their legitimate activities, assuring that the exercise would not infringe on their rights as the state government is ever resolute in ensuring safety of lives and property.