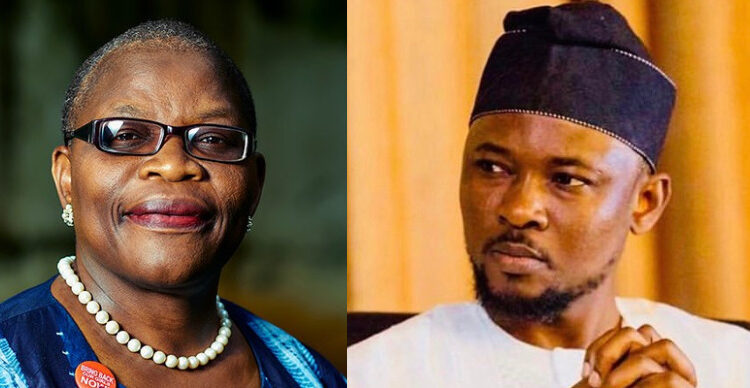 Following identity fraud allegations raised by former minister of education, Oby Ezekwesili, on establishment of a Public Relation firm, Alpha Reach, the firm’s boss and popular social media influencer, Japheth Omojuwa, has denied the claims raised by Ezekwesili and that she approved inclusion of her name as a member of the firm’s board of directors.

Omojuwa, rather than tender apology as requested by the ex-minister, narrated how he and Ezekwesili’s relationship started over 10 years ago and stated that there were correspondence between both parties that demonstrate the extent and strength of their relationship in the period leading to and after the registration of the company.

He noted that the documents to further prove the relationships between both parties which became intimate after Kaduna State Governor, Nasru El-Rufai, facilitated their meeting, her removal from the company’s board and other activities which were done for the former minister on bases of their relationship.

The social media influence disclosed that the relationship between him and the former minister deteriorated after he allegedly refused to run errands for Ezekwesili particularly fighting her perceived enemies on social media, allowing the ex-minister to shape his opinion on public issues anylonger.

Omojuwa, in a response to the former minister and signed by his counsel, Boonyameen Lawal, titled: RE: DEMAND FOR FULL DISCLOSURE AND PUBLIC APOLOGY BY MRS OBIAGELI EZEKWESILI IN RESPECT OF ALPHA REACH LTD, stressed that the documents and other valuables to further prove his claim would be released when Ezekwesili accept to sign an undertaken that the documents would not be release to the public.

According to him, given how former minister and her family shared the letter under reference on social media after he had acknowledged receiving it, she and her family cannot be trusted not to disclose the company’s sensitive corporate information if made available to her.

He said: “those documents will be made available upon a written undertaking that the documents would be treated with utmost confidentiality”.

Ezekwesili, who is also the Co-Convener of Bring Back Our Girls Group, had in a letter titled, ‘Complaint Over Fraudulent Use of the Name of Mrs Obiageli Ezekwesili as a Director of the Alpha Reach Limited RC no: 1066507 Incorporated in 2012 Demand for Full Disclosure and Public Apology’ threatening to sue if the requests were not granted.

According to the letter, sometime in 2012, Alpha Reach Limited was incorporated at the CAC as a construction company and had listed as Directors; Omojuwa, Damilola Ogunleye, el-Rufai Nasir, and Ezekwesili Obiageli.

The trouble started after reports emanated on how Omojuwa and other influencers allegedly played in the social media campaign for the release of alleged fraudster, Alex Saab, a Colombian who has been declared wanted in the United States (US) and is facing extradition charges in Cape Verde.

Responding, Omojuwa’s letter reads in part: “The company was indeed registered in 2012; our client however unequivocally denies your allegations that consent of your client was not sought before she was listed as a Director. Our client sought and obtained your client’s consent before listing her as a Director of the company, based on their close relationship, which you curiously omitted to mention in your letter.

“In the interest of completeness and the full disclosure that you requested in your letter, we have set below the basis upon which our client sought and obtained your client’s consent to be listed as a Director of the company to begin with

“Our client has a 10-year relationship with your client dating back to 2011. Our client had just completed the mandatory National Youth Service when he met your client, who took him under her wings and even assisted in paying part of his rent in Abuja in 2012. The relationship began when our client visited your client’s house in Abuja in the company of Mallam Nasir El-Rufai, upon her request. Our client enjoyed a triangular relationship with your client and Mallam El-Rufai, whom your client used to refer to as her “brother”. Both Mallam El-Rufai and your client were listed as Directors of Alpha Reach Company Limited when it was registered in 2012, with their full consent. Likewise, our client recalls being seated at the suite of a respected man of God at the Transcorp Hilton in Abuja, trusting your client with some very personal and painful stories. At a point in our client’s life, your client was his most trusted person and confidant. Some people can attest to this fact, and they will, at the appropriate time and forum.

“In addition, there are correspondence between both parties (on various platforms, including Yahoo.com, Aol.com, WorldBank.org, iCloud.com, gmail.com, BlackBerry chats, WhatsApp chats, and Twitter Direct Messages) that demonstrate the extent and strength of their relationship in the period leading to and after the registration of the company. For instance, on: 6 April 2012 at 21:23, your client sent a message to our client stating as
follow: “pull in your brother[s], Chine and Chuba [her biological sons) into what you do from now”. She made similar comments on 6 October 2012 (21:23), a month after the incorporation of Alpha Reach Company Limited;

“On 11 November 2013 at 13:57, over a year after the incorporation of Alpha Reach Company Limited, your client exchanged messages with our client calling him “dear son”, and requested social media favours;

“On 16 February 2016 at 08:12, long after the incorporation Alpha Reach Company Limited and her removal as a Director, your client exchanged messages with our client wherein she praised and described him as ‘exceptional

“Your client shared not only personal information but also her uncomplimentary opinions about other prominent people and former colleagues, with our client that she ordinarily would not share publicly, as she did on 16 April 2012 between 18:56 – 19:04 and 19 April 2013 at 10:13. These actions define the extent of the shared trust between both of them.

“Our client has similar documentary proof regarding the period leading to the removal of your client as a Director of Alpha Reach Company Limited. The relationship was not one-sided, and our client assisted your client in promoting various causes and engagements, as well as defending your client against perceived attacks on social media, often times on her request. Our client is prepared to provide documentary evidence to support the above claims and many more at the appropriate time and forum if the need arises.

“Clearly, your client is a successful public figure with whom our client had a close relationship. It is reasonable that our client wanted to leverage her reputation to advance the company he promoted. It was not until 2015 when it was certain that HE Mallam El-Rufai was going to become the Governor of Kaduna State and the likelihood that your client could be appointed a Minister by the then President-elect Muhammadu Buhari GCFR, that they both were removed as Directors of the company. You might recall that your client honoured the ruling party’s invitation to deliver a keynote speech at a public forum in Abuja in 2014, and there was a general expectation that she would play a role in President Buhari’s government. Indeed, your client leaned on our client to publish and distribute her speech at the APC forum.

“The relationship between your client and our client deteriorated because our client is no longer the impressionable boy who had just completed his NYSC in 2011. He is a man who has earned his stripes and is no longer willing to fight proxy wars or be used to fight perceived enemies by a benefactor. He is tired of your client’s constant efforts to control his public views and tweets”.

20 passengers die, three others injure during auto crash in Egypt