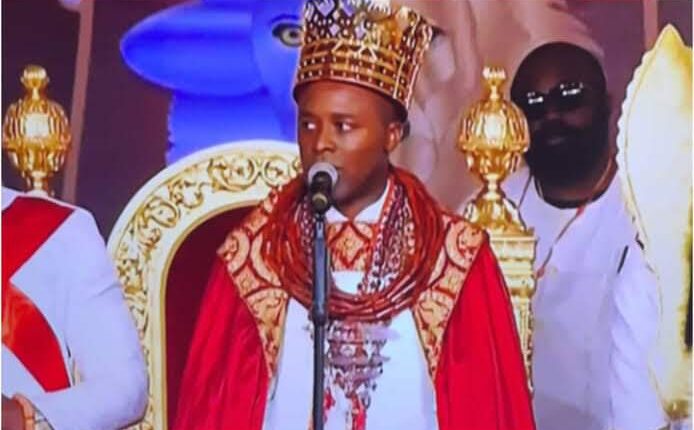 The Olu of Warri started his reign on a faulty note. Atuwatse 111 wandered into Pentecostal panegerics instead of Itshekiri cosmology in his first speech as monarch. This is so wrong for two reasons. First and foremost, he’s a TRADITIONAL ruler, not a gospel musician.

Singing Pentecostal songs is crass opportunism to win the hearts and minds of a people conquered by foreign religion and completely acculturated and assimilated. Secondly, what’s the purpose of the 90 days Idanike? It is to imbibe Itshekiri traditional beliefs, history, language, cuisine, music, wardrobe, and religion etc.

For crying out loud a traditional ruler is the chief marketing officer of his kingdom but this one demarketed his kingdom. The Olu was “confirmed ” as Omooba by the ORACLE, not the Holy Spirit or a pastor. The Itshekiris are a very cultural people and the Olu should be at the vanguard of the Itshekiri traditional values. If an Itshekiri man or woman dies the ORACLE is consulted to ascertain if he or she is evil before burial at Ode- Itshekiri.

An Oba of Benin will never stoop to the low level of a Pentecostal chorister on his big day. We must call a spade a spade and not a digging material. A traditional ruler is not a politician or a pastor but the custodian of the cultural values of the people.

The second error the Olu made was betrayal of his emotions. For no reason must the Olu cry or shed tears in public. The Olu is expected to be stoic. He’s supposed to be cool, calm and collected. The storm is over. The 1979 Edict that disqualified him was overturned by the majority of his subjects and he is now king. He should move on quickly and define his reign.

The Olu should have started his speech by acknowledging his ancestors and appeasing the gods of the land in Itsekiri language, for no reason should he have spoken in English. He then should have rolled out his vision and mission for Iwere land.

Let me explain; Iwere land is one of the few monolithic kingdoms in Nigeria with one monarch. You can find Itshekiri communities in far flung places yet the Itshekiris aren’t the exclusive autonomous inhabitants of Warri. You have the Izons and Urhobos as indigenous people of the territory called Warri today.

Congratulations to the Olu of Warri!!

Just In: I have been banned from meeting Buhari- Ortom