How bandits stone journalist to death in Kogi

Okorocha, two others appear before police over property tussle 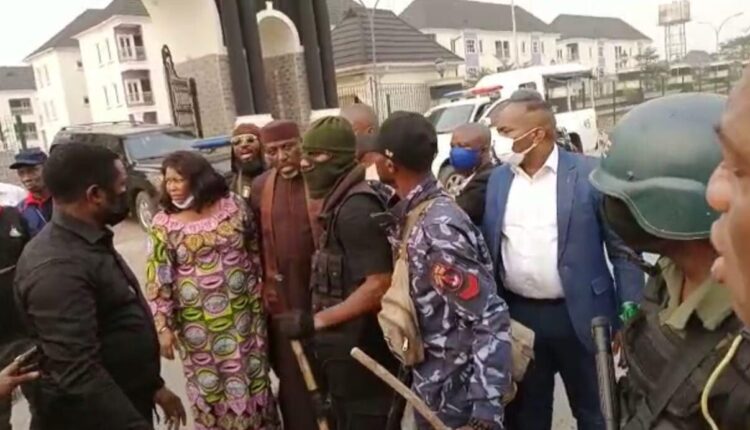 Former Governor of Imo State, Rochas Okorocha, has been arrested by operatives of the Nigeria Police Force, Imo State Command, for reopening a property sealed by the state government.

The property, Royal Palm Estate, sited in the Akachi axis of Owerri, the state capital, was linked to Nkechi Okorocha, wife of the former governor.

Trouble started when Okorocha, who was the governor of the state between 2011 and 2019, stormed the sealed facility on Sunday with his supporters among other security agents and unsealed the property.

When the news of the former governor’s action gets to the state government, state-backed officials also stormed the area, re-sealed the property, and arrested Okorocha.

Also arrested alongside Okorocha were Ijeoma Igboanusi and Lasbrey Okafor-Anyanwu who were the Deputy Chief of Staff (Domestics) and the Commissioner for Transportation during the former governor’s administration.

The ex-governor who now represents Imo West at the Senate had been at loggerhead with the incumbent Governor, Hope Uzodinma over alleged misappropriation of funds during the former’s tenure.

The Uzodinma-led state government had during the week sealed the property as part of those, it described, as recovered property.

Briefing newsmen after sealing the estate on Friday, the state’s Commissioner for Lands, Survey, and Physical Planning Development, Enyinnaya Onuegbu, said that the closure was in line with the directive of the Imo State gazette on the report of the Judicial Commission of Inquiry on Recovery of Lands and Related Matters belonging to the state government.

Reacting to the development, Okorocha alleged that the state-backed officials attacked him alongside his aide and also damaged vehicles in his convoy.

Through a statement by his spokesperson, Sam Onwuemeodo, the former governor said that the team that attacked him was led by Uzodinma’s Special Adviser on Special Duties, Chinasa Nwanari.

“They attacked and damaged all the Vehicles in his Convoy. They also attacked his personal aides. Senator Okorocha was with only his personal aides when the thugs unleashed the attack. This is the information we can give as of now. We are still watching events as they unfold.

“Okorocha has the strongest political structure in the state and teaming followers in the State. If he had expected the attack, he would not have moved with his personal aides alone. Okorocha has never been a violent man. This planned attack both unprovoked and unwarranted has opened a new, but ugly chapter in the politics of the State. We shall react fully to the situation,” the statement read,

Sand, gravel trucks in trouble over indiscriminate parking across Lagos