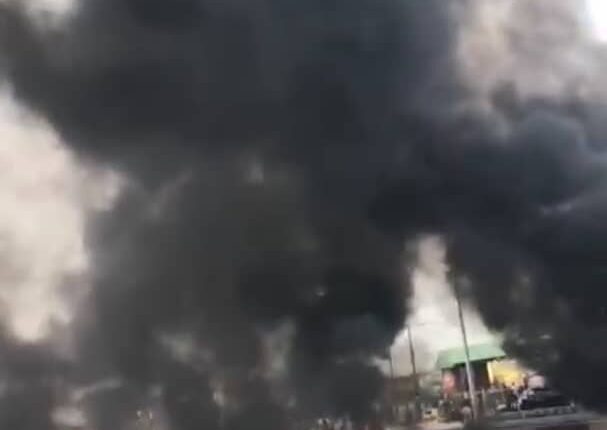 The riot said to have started at about 12:15 pm on Tuesday forced many commuters to trek long distances, under the scorching sun, to their different destinations after the rioters injured Taskforce personnel, Ganiyu Mustspha, took over the road and prevented vehicular movement.

Eyewitnesses said that the breakdown of law and order that occurred after at the Mile 2 end of the road has spread to some parts of Oshodi terminal with Okada operators barricading the road to express their displeasure over the law enforcement agency mode of operation.

As gathered, trouble started when the law enforcement officers deployed to the axis impounded Okadas found contravening the road traffic law that outlawed motorcycle operation on over 400 major highways, bridges, and roads across the state.

The Guild learnt that the riders attacked personnel of the law enforcement agency and set up burn fires on the ever-busy road to resist impoundment of their motorcycle, even as they threatened that any police officer seen would be lynched.

A resident, who witnessed the attack, narrated that the entire road had already been taken over by the rioters who were armed with sticks and other weapons to attack the policemen in the state. 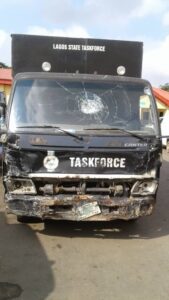 Adebayo added that aside from violating Lagos road traffic law, the riders also engage in robbery activities, dispossessing commuters of their valuables on Apapa-Oshodi expressway.

He noted that to protect Lagosians, the agency visited the axis to enforce the law, impounding atleast 72 Okadas from their operators for driving against the traffic on the road.

After the impoundment, the Taskforce spokesman, in a statement made available to The Guild, stated that the riders and hoodlums attacked the agency personnel and vandalised two Lagos taskforce vehicles including a truck.

Adebayo said: “Yes, the operatives of the Agency based of series of complaints from the public about activities of these Okada riders using their bikes to rob them of their valuables and plying restricted routes as well went out to the area for Enforcement.

“After impounding about 74 Okada caught plying one-way and those operating on highway, Okada riders mobilised themselves and attacked officers of the Agency

“A Paramilitary officer attached to the Agency (Ganiyu Mustspha) was wounded with broken bottles and Cutlass because he mistakenly ran into the mob.

“Since the EndSARS protest every motorist including Okada riders operates with impunity thereby causing serious traffic gridlock across the State.

“We had a stakeholder meeting with their Okada leaders and they made us understand that all those flagrantly disobeying the laws are not responsible to any associations in Lagos.

“We must all join hands together to salvage the State from the hands of these notorious criminals who uses Okada to perpetuate evil to the public”.