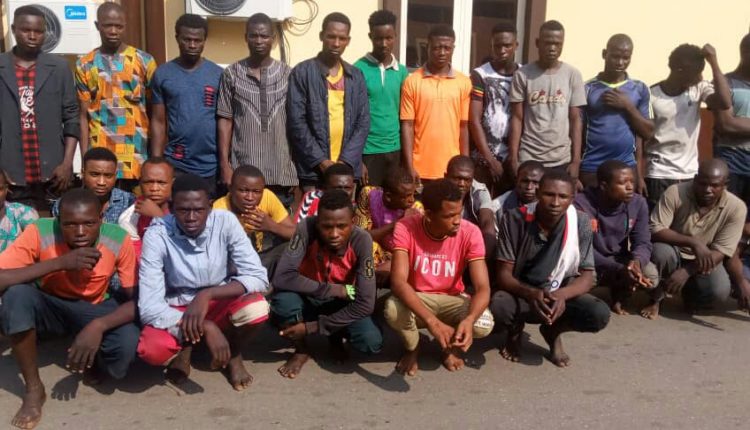 Officials of the Lagos State Environmental and Special Offences (Enforcement) Unit (Taskforce) were attacked by no fewer than 14 commercial motorcyclists popularly called Okada riders at the Oshodi under bridge axis of Lagos.

It was gathered that a paramilitary officer, Innocent Okoro, was injured and the riders allegedly damaged an operational vehicle of the agency.

Sources said that the attack started after the riders discovered that the agency enforcement team had arrested over 100 Okadas while enforcing the traffic law on Thursday.

An eyewitness stated that after the attack, the riders flee the scene when they discovered that the attacked officials had alerted their headquarters for backup personnel, and hide inside a residential building on Igbehinadun Street, Oshodi and locked themselves up.

It was learned that on arrival of the backup, the taskforce officials chased the riders to the building but some escaped by scaling the fence.

Confirming the attack, Chairman of the Agency, Olayinka Egbeyemi, disclosed that a distressed call was received that Taskforce officials on enforcement were attacked at Oshodi under-bridge.

Egbeyemi disclosed further that immediately after they attacked officials of the Agency, a backup from the agency stormed the axis.

He confirmed that the while some of them escaped through the fence the enforcement team arrested 46 of them including those who carried out the attack.

“Out of these 46 arrested suspects, 18 were released after a thorough screening and the Lagos State Commissioner of Police CP Hakeem Odumosu directed that the remaining 28 be prosecuted in court”.

In a statement signed by the agency’s Public Affairs Officer, Taofiq Adebayo, it was gathered that 231 Okada were impounded within Oshodi axis.

While urging all motorcyclists and road users across the state to operate within the ambit of the law, the Chairman restated the determination of the Agency to ensure that all residents in the state comply with the Lagos State Road Traffic Law of 2012.