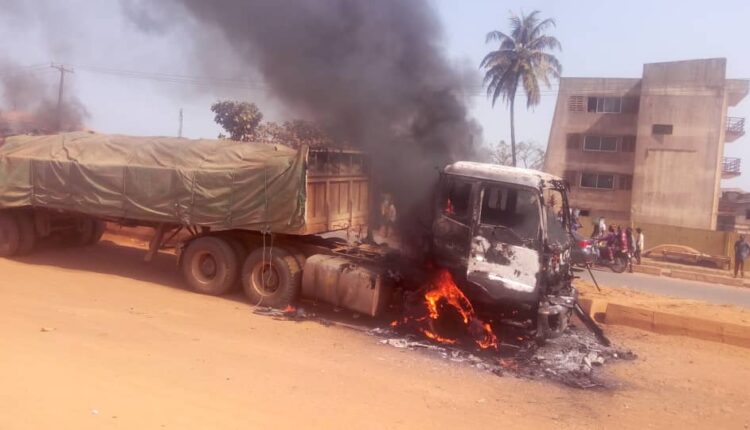 Activities in the Yewa axis of Ogun State was reported to have been crippled after dozens of youth set ablaze a cement truck belonging to Dangote Cement Company for allegedly crushing two commercial motorcyclists to death.

The irate youths were said to have been angered following discovery that the accident was solely caused by the truck driver and that he and his assistant were trying to flee from the incident scene that claimed both motorcyclists’ lives.

It was gathered that the truck which belonged to Dangote Cement Factory sited in Ibese, Yewa North Local Government Area of the state skied off its lane and bashed the commercial motorcyclists popularly called Okada riders to death.

The Public Relations Officer (PRO) of Ogun State Traffic Compliance and Enforcement Corps (TRACE), Babatunde Akinbiyi, who confirmed the incident to newsmen in Abeokuta, the state capital, on Saturday, said that the two deceased were killed minutes after leaving Igbogila for Ilaro axis of the state.

Akinbiyi, who disclosed that the accident occurred yesterday, narrated that the tragedy occurred at about 8 a.m and was caused by overspeeding on the part of the truck driver.

“It ran over the motorcyclist who was trying to negotiate the roundabout as at that time and killed him on the spot. The driver was later apprehended after an attempt to run away and was beaten mercilessly by the angry mob who also set the truck on fire. But for the intervention of TRACE, Nigerian Police, and other law enforcement agencies, the driver would have been killed,” he added.

The TRACE spokesman further said that the driver and the motor boy had been arrested and taken to Igbeba Motor Traffic Division, Ijebu-Ode, adding, the body of the two victims have been deposited at the mortuary of Femtop Hospital, Ijebu-Ode.

Akinbiyi urged drivers of articulated vehicles to maintain their vehicles, be more responsive when driving, and avoid speeding, especially when approaching a bend and roundabout.