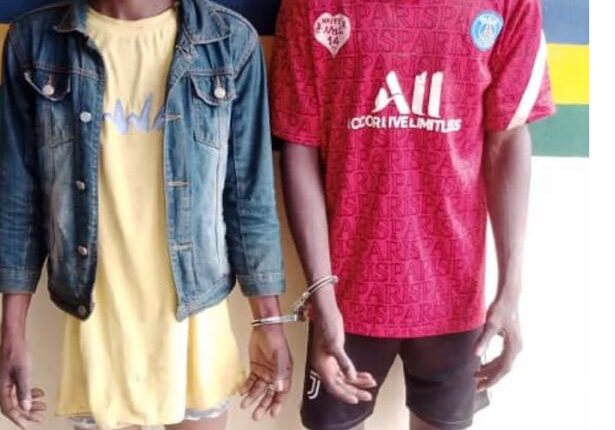 No fewer than two armed robbery suspects were reported to have been arrested by men of Ogun Police Command for allegedly robbing a point of sales (POS)  operator, identified as Ajose Bilikisu,  at gunpoint in Ketu area of the state.

As stated, the suspects,  Balogun Haruna, 25yrs, and Imole Noah were said to have been apprehended by men of the operative on Saturday, 22nd of May 2021.

The spokesman in a statement made available to newsmen yesterday stated that four armed men were attacking a POS operator at Ketu Adiowe community and that the hoodlums had dispossessed the woman of her bag containing the sum of  N60,000, two androids phones, and a bunch of keys.

Oyeyemi noted that “upon the distress call, the DPO Idanyin division CSP Olayinka Kuye quickly led his patrol team to the area, where the duo of Balogun Haruna, aka Fitila, and Imole Noah were arrested with assistance from members of the community.

“The two other suspects escaped with their arms.

“On interrogation, Balogun Haruna who claimed to be a member of Eye confraternity, confessed to the crime, while the victim has also identified him and his partner as those who robbed her. An expended cartridge was recovered from them.

Oyeyemi said the state commissioner of police, CP Edward Ajogun, has ordered the immediate transfer of the suspects to state criminal investigation and intelligence department for discreet investigation.

He said the commissioner of police has also directed that the escaped members of the gang be hunted for and brought to book, as soon as possible.