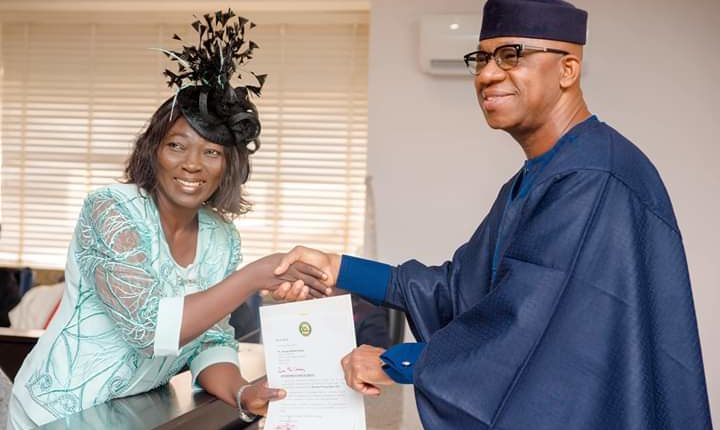 Share
By Olawale Abdul-Fatah
The Ogun State Governor, Dapo Abiodun, has warned workers against absenteeism, just as he charged the state’s public servant to rededicate themselves towards quality service delivery
Abiodun, who gave the warning on Thursday while swearing in new Head of Service, Amope Chokor, at the Governor’s Office,  stressed that his administration wants workers that are dedicated to duty.
He said: “I charge our workers to be more dedicated and  professional in the discharge of their duties and together, we will achieve the Ogun State of our dreams”.
The Governor noted that his administration would observe due process and transparency in all its dealings as well as be inclusive and participatory to the people irrespective of their age, gender, status and location.
He stated assured civil and public servants that his administration would continue to accord them their status as important stakeholders who have contributed to the modest achievements recorded in the last six months.
Abiodun noted that public servants have been the arrowhead of the successful implementation of the “Building the State Together” agenda.
“Let me use this occasion to affirm the important status of the State civil and public servants in the successful implementation of our ‘building our State together’ agenda. The dedication, commitment and professionalism that our public servants have exhibited are key ingredients that guaranteed the success of ‘building our future together.’
“Therefore in appreciation, our administration would continue to accord all our civil and public servants their status as important stakeholders in the ‘building our future together’ agenda. As a matter of fact, we will continue to ensure prompt payment of salaries and allowances. We are also working to clear the backlog of promotions, leave bonuses and other allowances.
While congratulating the new Head of Service, Abiodun said her appointment was a product of due diligence, merit and careful consideration, urging her to consider her elevation as an act of God.
“I want to congratulate the new Head of Service. I want you to consider this appointment as an act of God. You have been chosen out of many others who are equally qualified and possess the required skills and experience to steer the ship of the Ogun State Public Service.
“Ogun State has a legacy of excellence to protect in the public service. Let me remind you that you are the standard bearer of the legacy left behind for us by your predecessors.
“I charge you to take further the legacy of the public service to greater heights in particular. I charge you to attain and improve on the exceptional records of the past Heads of Service,” he said.
He charged her to lead and inspire the public service that would engender the required trust and confidence of the private sector for cooperation and collaboration, adding that it was her duty to provide leadership that would spur the public service to greater productivity, while calling on her to bring her vast wealth of experience to bare as she leads the Service.
Speaking earlier, the Head of Service, Chokor, said the public service occupies a strategic place in  actualising the goals and objectives of the political class, adding that it was through the Service that the visions and aspirations of government would be translated into concrete terms for the people.
While calling on civil servants to join her not only to maintain the enviable record of excellence, but to take it to a higher pedestal, the Head of Service appreciated the Governor for extending the inclusive policy to the bureaucrats to enable them contribute to moving the State forward.
The Olota of Ota in his remarks, said the people of the area had been clamouring for more opportunities to serve the State at a higher level, as he commended the State Government for finding their daughter worthy for the position.