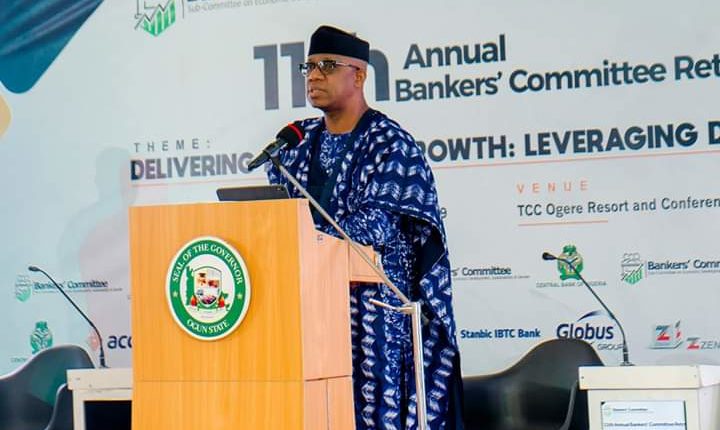 Share
By Olawale Abdul-Fatah
Ogun State Governor, Dapo Abiodun, has revealed that actions of the commercial banks in Nigeria are having negative impact on the country’s economy rather than improve it.
Abiodun added that one of their actions that has not improve the country’s economy was the act of assist rich men to buy off their debt with others customers savings.
The governor stressed the such system must be abolished because this practice does not augur well with the economy of the nation.
He also pleaded that they should look at how the inflation rate would be reduced as well as put an end to the non-remittance of public funds by those collecting taxes, rates and charges on behalf of government.
The Governor, who spoke while welcoming participants to the 11th Annual Banker’s Committee Retreat, themed: “Delivering Inclusive Growth: Leveraging Digital Finance,” held at the Resort and Conference Centre, Ogere-Remo, Ikenne Local Government Area, lamented that less privileged customers bear the brunt, saying this is “the message of the masses to the Banker’s Committee.”
Abiodun said it was imperative for bankers to evolve more pragmatic approaches that would encourage savings and investments, create links between savers and investors and also facilitate the expansion of the financial market.
The Governor noted that the promotion of the local Adire fabric was his administration’s deliberate policy to stimulate the country’s market and create value chain, adding that government would partner with banks to get single digit interest loans for the State’s farmers, retailers, artisans and tradesmen.
He said though the country depended more on the oil industry, “the banking industry plays a crucial role in the development of agriculture and its value chain, infrastructure, manufacturing, education, health, among others.
“In agriculture, we are particularly grateful to the Central Bank of Nigeria (CBN) for partnering with us on the Anchor Borrowers’ Scheme that has the potential to lift over one million people out of poverty and is targeted at producing 200,000 agri-preneuers.”
Abiodun reiterated that government would make  information available through digitalization, to drive employment and create jobs and was working on digitising the process of land administration through the Geographic Information System (GIS).
“We are also implementing improved Digital Treasury Management Solutions to block leakages, drive efficiency and ensure transparency in the management of public funds,” he said.
The Governor pointed out that the theme of the retreat was in tandem with his administration’s inclusive and participatory approach to governance, adding that the State had attracted 75 percent Foreign Direct Investment in the last three years as a result of its conducive business environment.
In his speech, the Governor of the CBN and Chairman of the Banker’s Committee, Godwin  Emefiele, charged commercial banks and other financial institutions to ensure they provide better services that would add value to the nation’s economy.
Emefiele noted that banks, as major stakeholders, should play their roles as catalyst to the nation’s economic development, by impacting positively on the well being of the citizens rather than engaging in money-making activities alone.
He posited that there was a link between economic growth and  security, advising participants to plan ahead in order to achieve a robust and efficient economy that will add value to all categories of business men and women.