Octogenarian woman, granddaughter, others under NDLEA detention over cocaine peddling 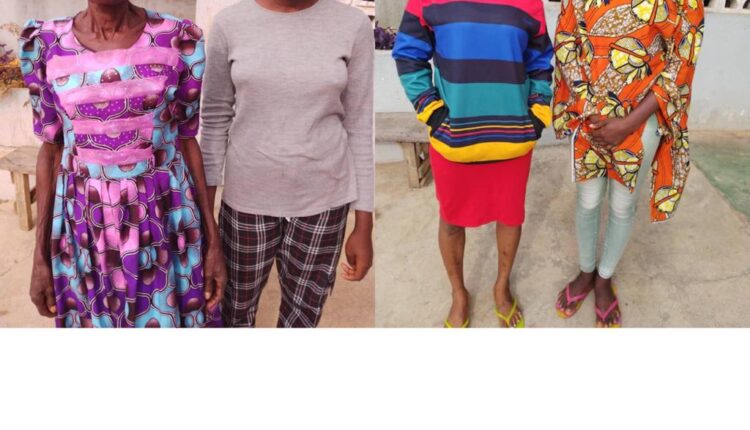 An 80-year-old woman, identified as, Mary Adebayo, her granddaughter, and two others have been held by the Nigerian Drug Law Enforcement Agency (NDLEA) for allegedly selling illicit drugs in Ondo and its environs.

It was stated that after the octogenarian, and her 19-year-old granddaughter, identified as, Funmilola Adebayo and two other ladies, Tessy Matthew and Blessing Adesida were arrested, over 192kilogrammes of cocaine and other psychoactive substances were recovered from them.

It was gathered that most of the illicit drugs seized from the suspects are cocaine, heroin, methamphetamine, tramadol, swinol and skuchies.

The old woman and her granddaughter were said to have specialized in selling illicit drugs to members of the public in Akure, the Ondo state before they were nabbed by the law enforcement agency.

As learnt, the duo’s cover was blown after following intelligence-based raids and follow-up operations on their locations on Sunday 2nd May 2021.

Confirming the development, the Director, Media, and Advocacy, Femi Babafemi, revealed that the suspects were arrested by the operatives of the National Drug Law Enforcement Agency, NDLEAS at Ayeyemi Street, Akure south local government area.

Babafemi listed items recovered from the octogenarian and granddaughter to include, Skuchies- 149kg, cocaine-11grammes, methamphetamine-17grammes, heroin-3grammes, cannabis sativa- 4.914kg, swinol -8grammes and tramadol -49grammes, adding that two deep freezers and a TVS motorcycle were also recovered from them.

The spokesman, in a statement made available to newsmen on Wednesday, revealed that another raid was carried out on the same date at Rate Hotel, Care Street, in Akure South local government and it led to the arrest of a 25-year-old lady, Tessy Mathew from whom 33kilogrammes of skuchies were recovered.

“Following her preliminary interrogation, a follow-up operation was immediately carried out, leading to the arrest of 25-year-old Blessing Adesida in Oshinle area of Akure South LGA.”

According to the state’s acting Commander of the Agency, Callys Alumona, other members of the two drug cartels have been watch-listed and efforts to arrest them was ongoing.

Meanwhile, the Chairman/Chief Executive of the anti-drug agency, Buba Marwa has in his reaction to the operations directed the state’s acting Commander to launch a manhunt for other members of the drug cartel now on the run.