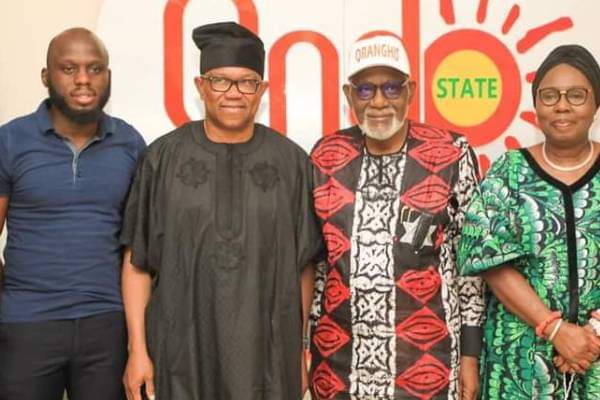 The Presidential Candidate of the Labour Party (LP), Peter Obi, has declared his support for Ondo State Governor, Rotimi Akeredolu’s move to ensure that the Southwest security outfit, Amotekun Corps, bears arms to tackle insecurity across the region.

Obi said that the push by the governor for the state’s security outfit to bear arms after security challenges became tense indicated that he understands Nigerians’ desire at this present time.

The presidential flagbearer described Akeredolu as a leader who speaks the truth at all times irrespective of the consequences and that his style of leadership style would continuously be embraced by Nigerians.

The LP Presidential candidate, who made his support public on Tuesday during a condolence visit to Akeredolu at the Presidential Lodge, Government House, Alagbaka, Akure, the Ondo state capital, the push for Amotekun to bear arms must be sustained since it represented the interest of the people.

“Arm those special security poeple. Take every step to protect your people. It is important and it is your duty. I’m happy that you are speaking out always when necessary. May God Almighty continue to be with you and bless all of you.” he added.

Obi, who said things are going wrong in the country because people choose to keep quiet, commended the governor for speaking up for the people.

He charged Akeredolu to continue to take every necessary step to protect his people, adding that the Governor is doing the right thing.

The LP candidate said: “I urge you to continue in that direction. You represent one of those things Nigerians desire, ability to speak the truth no matter the consequences.

Responding, Akeredolu commended Obi and his entourage for finding time to visit him over the demise of his mother who passed on at the age 90.

Akeredolu, who said what happened on June 5 at St Francis Catholic Church, Owo, was horrendous, described the sad incident that claimed over 41 worshippers lives, as unexpected and uncommon, especially in the Southern part of the country.

Also on the ground to receive him were the wife of the Governor, Chief Betty Anyanwu-Akeredolu; the Deputy Governor, Hon. Lucky Aiyedatiwa; the Secretary to the State Government, Princess Oladunni Odu; the Chief of Staff, Chief Olugbenga Ale; Director General of the Project Performance and Implementation Monitoring Unit and grandson of the deceased, Babajide Akeredolu among others.