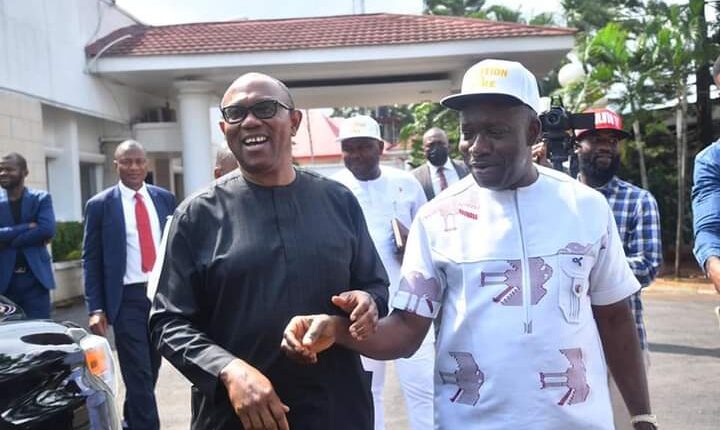 Ordinarily I wouldn’t have responded to this vainglorious and Empty Essay by Professor Soludo. But after wasting my Data and time reading this Trash, I want to set the records straight. I am not a fan of Mr Peter Obi and I have never supported Governor Peter Obi in anything. In 2010, I supported Prof. Soludo in PDP. My Ward then was one of those 10 wards Prof. Soludo won as PDP Governorship Candidate. In 2013, Peter Obi brought Obiano, I never supported Obiano and APGA because the Party was built on envy and lies.

I have asked myself, the letter released today by Prof. Soludo, is it necessary? I have wasted my time and data to read it carefully. The letter would be necessary if Peter Obi himself had responded to Soludo’s outing on Channels Tv. It might be necessary also if Peter Obi had authorised his spokesperson to reply Soludo. In that case, the reply should also come from Soludo’s aide, not him. In this case, Our Professor is replying to himself. He granted Interview and was replying to his interview. Is this how he got the Professorship.

So, the letter can be faulted on grounds of strategic purpose for Him (Soludo) in that the governor should not engage a mob. Professor Soludo belittled himself and his office by engaging the Mobs as he called them.

From Prof. Soludo purported and so called response to the trending issue,”All Peter Obi’s Investment are worthless. The Governor ended up saying nothing new. All the Rhetorics he is trying to portray, are what people are already aware of. The lengthy esay is as empty as anything you can think of. To Professor Soludo, what you said on Channels Television is very clear. Even ordinary Trader in Main Market understood you clear. You are just beating around the bush. You are a Professor of Economics or one time Governor of Central Bank, that does not make you the most intelligent or brilliant Igbo Man. You becoming the Governor of Central is just an opportunity which can come to anybody. You are just lucky to get it, not that you are the most qualified for it. There are people with two PhDs, yet they are still where they are today. Thank your gods who made it possible for you.

You are probing a man who handed over 9 years ago. Governor Obiano did the same during his tenure and found nothing. Now, you are towing the same line. We are watching. We want the Probe to be public. So that Ndi Anambra will know the pure truth. Bear it in mind, what goes around, comes around. We have seen BILLIONS you are mapping out for roads in Anambra State all in the name of STONEBASE ROADS. Even the companies that are being used for those constructions. We are watching also with keen interest.

Taking time to go through this Professor Soludo’s Envy-laden and logically error riddled offering, you can see that politically, Professor Soludo is confused and envy of what his Brother has achieved in the Political space within a shortest time. Ambition is not a crime. Mr Peter Obi contesting for President of this country is not a crime and I don’t expect everybody to support him.

There are many burning Issues in the country. We have serious economic and security issues. One would have expected our Professor of economics to come up with a blueprint on how we will address the economic problems of the country. Rather, Our Much celebrated Professor is discussing Personality instead of Core issues.

In the baseless Essay, you can see Prof. Soludo speaking from two sides of his mouth. He is urging Ndi Igbo to Support APGA as an Igbo Party in order to give Ndi Igbo voice. He said APGA has a Presidential Candidate. He also said in the same essay that there are only two Presidential Candidates. That means to him, Mr Peter Obi, Kwankwanso, Abiola and even his own Peter Umeadi of APGA are not in the race. So if Jutlstice Umeadi is not in the Race, so why asking people to vote for your Party Candidate, when you know he is not a serious contender. That is a ranting of a confused Professor.

To Prof. Soludo, Mr Peter Obi is not in the Presidential race. He is just catching cruise. The mammoth crowd that Welcomed Mr Peter Obi in Edo State and Abia State, are they out there for cruise. I challenge Prof. Soludo to organise 10,000 man March for his Party, APGA and Presidential Candidate in Anambra State, 1000 man March for the same man in any Nigerian State.

You said Peter Obi cannot be President from Jumping from one party to another. Did you Prof. Solduo not become Governor from Jumping from PDP to APGA? Did President Buhari not become President from jumping from ANPP to CPC to APC. It is very clear you are too jealous of Mr Peter Obi. I know you have not forgiven Peter Obi for defeating you in 2010 and for your disqualification as an APGA aspirant in 2013. I know you have not forgiven Senator Victor Umeh for that disqualification that is why you made everything possible to make sure Victor Umeh didn’t get that Anambra Central Ticket of APGA. To you, it is better APGA loses Anambra Central instead of Senator Victor Umeh clinching the Ticket. Yet, you claim to be a Christian. You are a sadist.

I make bold to ask Prof. Soludo to tell Ndi Anambra what made his own investment in the mining sector Worthless? Or do you think we do not know that you sold almost all your shares and invested in the MINNING SECTOR, which you lost all the investment. Your saving grace was Governor Obiano who revived you and gave you the Governorship seat against all odds.

To Professor Soludo, he is the most intelligent Igbo man. He knows more than everyone. For those who didn’t know, It is on record that Prof. Soludo fought Goodluck Jonathan, Dr. Ngozi Okonjo Iweala, Prof. Dora Akunyili, even in death, fought for autonomous community in his town. Does a Leopard change its spots? Not at all.

Today, Prof. Soludo is the only economics and a Political seer of our time. He is the only one that knows who will win election and who will lose election. Since Soludo is a seer, why didn’t he see that he will not win in 2010. Yet he went ahead to contest for the Governor. Why didn’t he see that APGA swill disqualify him in 2013. Mr seer in Politics. I could remember in 2010, When Prof. Soludo was addressing us in PDP, he said he was the ordained Candidate. He will win the election and he is the Next Governor of ANAMBRA State. That Yar’dua wants to use Anambra State to test him. That his main target is the President. He is going to be the first Igbo man to be President. So they want to use Anambra and see what he can do. That was why he can with that useless slogan”AFRICAN-DUBAI-TAIWAN AGENDA.”

Therefore, Prof. Soludo’s letter in my view, is neither here nor there, and ultimately failed certain strategic tests, based on what is at stake for him. And what is at stake for Prof. Soludo. He wants to contest for President. He is supporting Atiku Abubakar to become President. After Atiku’s First Tenure. He will be used as Atiku’s running Mate during his second tenure. Then Atiku will hand over to him as Presidential Candidate of PDP. What a marvellous dream, Prof. Soludo.

I will end this article with this statement from Professor Madam Ngozi Okonjo Iweala about Our Lousy Professor, “an embittered loser in the Nigerian political space” who is “so derailed” to “commit intellectual harakiri by deliberately misquoting economic facts and maliciously turning statistics on their head to justify a hatchet job. “Soludo has shamelessly pandered to so many past leaders that Nigerians are asking one more time – what position is Soludo gunning for now?”.

“There is definitely an issue of character with Prof. Charles Soludo and his desperate search for power and relevance in Nigeria. Nigerians should therefore beware of so-called intellectuals without character and wisdom because this combination is fatal.”

Paschal Candle is a Political and Public Affairs analyst writing from Abuja, The Federal Capital Territory.

Presidential democracy and the culture of debate