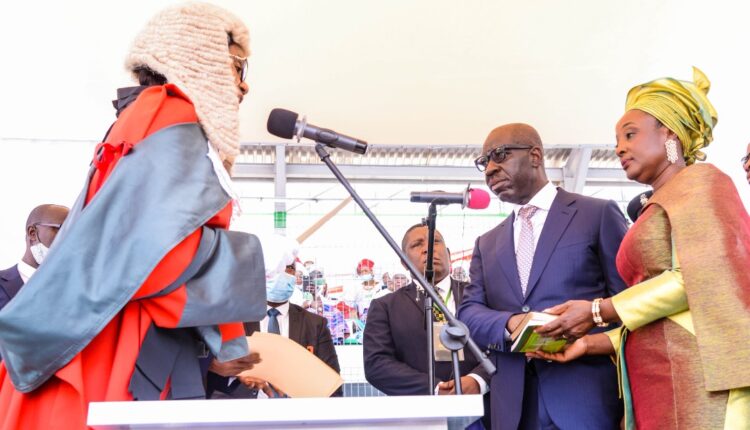 After successfully winning reelection, the Edo State Governor, Godwin Obaseki, has taken the Oath of Office, signalling the commencement of his second term of four years.

He was sworn in alongside his Deputy, Philip Shaibu, whom joint ticket defeated the candidate of All Progressives Congress, Osagie Ize-Iyamu, during the September 19, 2020 governorship election.

Speaking after the Oath of Office was administered to him on Thursday by the state’s Chief Judge, Justice Esther Edigin, Obaseki noted that his administration would prioritise the citizens’ welfare by consolidating on his first term achievements.

He noted that his government would be committing to deepening reforms and diversifying the state’s economy to consolidate on progress recorded in his first term in office.

Obaseki noted that since his victory could not be divorced from the indomitable will and determination of Edo State people, it was important that his administration take giant leap in diversifying state’s economy for progress and betterment of all residents.

According to him, it is now time to take our collective destinies in our own hands and commence the arduous task of making Edo great again.
“My administration will continue to provide value for their money (tax revenues) by utilizing it judiciously, transparently and with accountability, especially in view of existential challenges arising from the COVID-19 pandemic.

“We will also rapidly develop our critical energy, housing, digital and road Infrastructure, which provides a framework to drive inclusive growth as well as build the economy and drive industrialization, trade and investment, to solidify our state’s status as the choice investment destination in the country.

“We will preserve the environment and public utilities, to make our state more functional and adapt to the challenges of climate change and rural-urban migration. Our major drive will be the clean and green Edo initiative and sustaining our campaign to plant trees and restore the forest,” the governor said during his address at the inauguration which took place on Thursday at the Tennis Court of the Samuel Ogbemudia Stadium, Benin City.