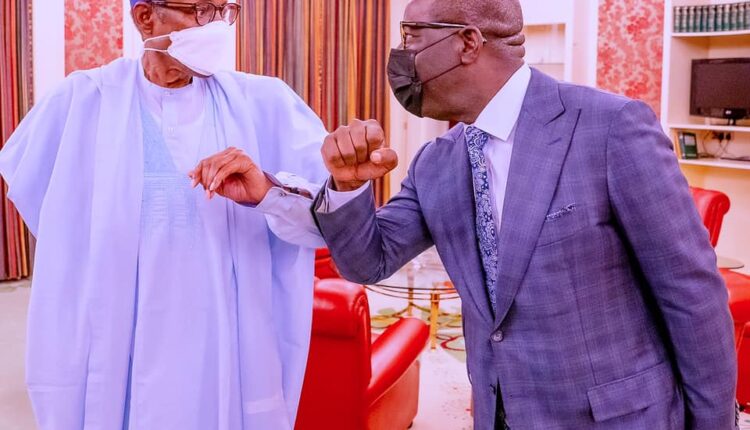 Despite possible political maneuvering, alignment and realignment ahead 2023 general elections, the Edo State Governor, Godwin Obaseki, has ruled out his possibility of rejoining All Progressives Congress (APC) in the nearest future, saying he remain committed to his current party.

He said that though there would be major changes and movements among political bigwigs in months leading to 2023 general elections, he would not be dumping the Peoples Democratic Party (PDP) who provided him the needed shelter when some APC leaders orchestrated his removal from his former party.

Briefing State House correspondents on Wednesday after meeting behind closed doors with President Muhammadu Buhari, the governor maintained that while he was in APC, he had played his role diligently as loyal party member and his trajectories began to upset those against his second term ambition.

Asked whether he had any plan to return to the APC, he said, “Well, I think I have shown that I’m a politician with integrity and I have made it very clear that I didn’t leave the other party on my own.

“I was pushed out of the party, and someone else gave me cover, gave me an opportunity, it will not be the right thing to do. To now leave who helped you, who gave you the umbrella in your storm, and then go back to the person who pushed you out.”

It would be recalled that last year, hopes of APC to reclaim Edo State leadership from Obaseki, who decamped to PDP were dashed after Independent National Electoral Commission (INEC) declared the incumbent winner of the gubernatorial election.

Obaseki defeated his main challenger, the APC flagbarer, Osagie Ize-Iyamu by polling 307, 955 against APC 223, 619, a development said to have ended APC’s alleged stronghold on Edo politics.

Obaseki was elected on APC’s platform in 2016 but defected to the PDP after a running battle with his erstwhile boss and former Governor, Adams Oshiomhole, a development that led to Obaseki being denied the party ticket for second term.

Also, Obaseki disclosed plans of returning to classroom after the expiration of his second term administration in the state. He said that seeking to represent the state at the National Assembly would limit him to serving a segment of Edo after been elected to pilot affairs and lead millions of residents across the state.

He stated that rather than follow the path of his former colleagues that have taken seat at the Senate, his efforts would be concentrated on building next generation of leaders for the country.

The governor argued that the highest position in the state was the governor’s office and that seeking for another electoral position that would limit him to serving a section of Edo would diminish his status in the state.

“I will not be contesting for senatorial seat because it will limit me to one section of the state and for me that does not worth it. I have been elected to lead the state twice, for me, it is enough”.