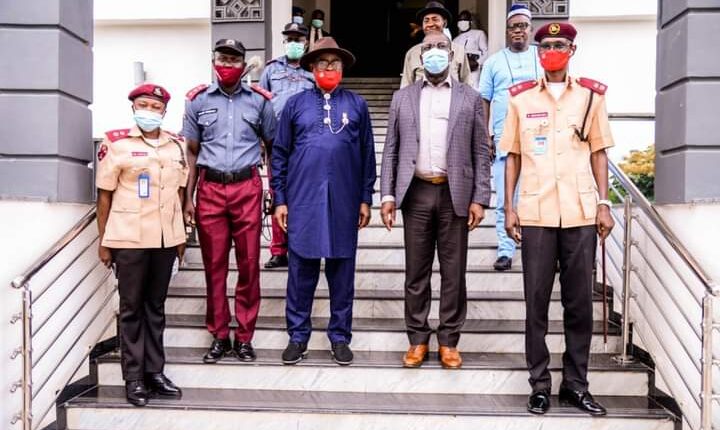 The Edo State Governor, Godwin Obaseki, has recommended the review of the country’s transportation system to bring about the adoption of mass transit systems to checkmate traffic issues on major roads across the country.

Obaseki said that the national transportation policy was obviously not working and has not been able to address the challenges confronting the nation’s road transport system.

The governor advocated for a review of the transportation policy when he received the out-gone Federal Road Safety Corps (FRSC), Zone 5, Zonal Commanding Officer, Godwin Ogagaoghene, who was on a courtesy visit at the Government House, Benin City.

He noted that for the country to have fewer vehicles on the road, the mass transit system remains a viable solution to move Nigerians daily rather than using vehicles that move lesser passengers.

According to him, There is quite a spread of federal roads even within the metropolitan areas; you will agree with me that traffic has become a problem for us. This is not because we don’t have the road network but because of sheer size and the influx of people into the state.

“We also believe it’s high time that we revisited our transportation policies. It’s not just sustainable to move the majority of our people in cars; we must look at working with your documents in national transportation policy and see how we can begin to encourage mass transit systems.”

“We are likely to run into some problems soon with the current economic challenges in the country; we need to introduce a mass transit system that will help to cushion the effects on the masses.

“Just like you said, we enjoyed a good cordial working relationship with your agency, particularly the support you have given our own Edo State Traffic Management Agency (EDSTMA). I know you have been quite supportive in terms of capacity building, collaboration, and cooperation.

“The working relationship shows what can be achieved when there is a cooperation between the federal and state agencies. We are strategically positioned in terms of federal roads and so the span you have to cover in Edo, I believe has been quite extensive”, he added.

While stressing the need for collaboration, the governor said: “This is one of the areas that we will continue to look at the agency to collaborate with in order to further strengthen transportation systems of our dear state. I would like to urge you not to retire even though you are formally retired”.

Obaseki noted that the training, experience and knowledge acquired by the FRSC ex-boss and other senior law enforcement agency officers that have retired should be put to use especially as the country battle to address numerous challenges.

Earlier, Ogagaoghene assured Governor Obaseki that he would help in training the state-owned EDSTMA in traffic management and ensure the arrest of traffic offenders.