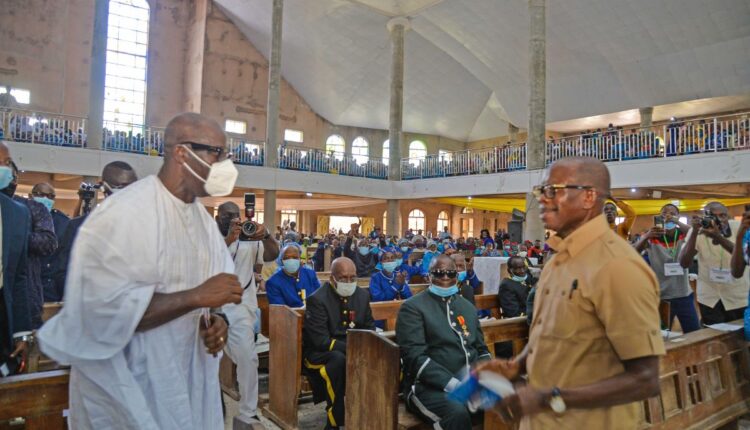 Barely eight months after the relationship between Edo State Governor, Godwin Obaseki, and his immediate predecessor, Adams Oshiomhole, degenerated, both men have signaled plans to end their rift publicly and reunite for the state development

As a start to the unification after courts threw all cases filed by the All Progressive Congress (APC) to challenge the governor’s re-election out, Obaseki and Oshiomhole have described each other as brothers and sons of Edo.

The governor and the former chairman of the APC met in Auchi axis of the state on Saturday at the Centenary Birthday Thanksgiving of Monsignor. Thomas Oleghe, and 18th Canonical Erection Anniversary of the Diocese of Auchi held at Immaculate Conception Cathedral in Auchi.

At the event, unlike before, both men exchanged pleasantries in accordance with COVID-19 preventive protocols, an action that indicated that they could have started putting their differences aside after Obaseki, who was denied a return ticket by APC, jumped ship to Peoples Democratic Party (PDP) to achieve his aim.

Addressing the guest, the governor stressed that what the public could see as a rift between them was due to the interest and passion to see Edo become greater than where it was years before, saying, we are both sons of Edo with the state interest at heart.

On the podium, Obaseki maintained that he had no personal grudges against his predecessor, Oshiomhole, but only dislikes his style of politics.

The governor further used the occasion to clarified reasons for PDP’s Zonal Congress postponement that was earlier scheduled to hold this Saturday, saying, it was postponed due to the local government elections taking place in Delta State.

On his part, Oshiomhole, who was a guest at the event, hailed his successor, Governor Obaseki, describing him as ‘his brother and friend.’

Oshiomhole stated: “Once the governor speaks, the matter ends. The governor knows that pensioners here might not be able to do much, that is why he said every other thing required to complete the hostel of the Catholic School of Nursing and Midwifery in Uzairue, his government will do.”