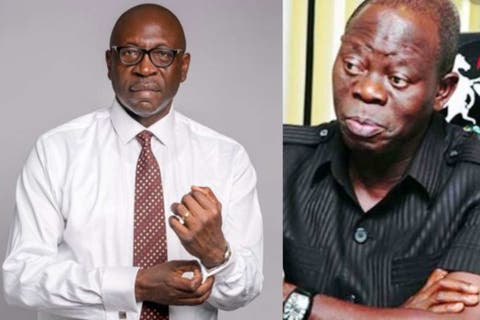 The Edo State Governor, Godwin Obaski, has called on former National Chairman of All Progressive Congress (APC), Adams Oshiomhole, and APC candidate in the just concluded governorship election, Osagie Ize-Iyamu, to close ranks and join hands with him toward moving the state forward.

He explained that the need to ensure residents across the state enjoy dividends of democracy and that all stakeholders remain committed to the development of Edo irrespective of religious, ethnic, or political affiliations necessitated the call.

The Governor noted that it was imperative for Oshiomhole, who was the immediate past governor of the state, to put aside the differences and support his administration in moving Edo to its zenith in terms of development and people’s welfare.

Speaking after the Independent National Electoral Commission (INEC), presented Certificates of Return (COR) to him and his running mate, Philip Shaibu, in Benin on Tuesday, Obaseki maintained that harmonious relationship between his administration, the duo, and other stakeholders would engender peace, stability, and progress in line with foundation laid by his predecessors.

“I am using this opportunity to extend a hand of fellowship to my brother, Osagie Ize-iyamu, and other colleagues in the APC to work with us to move Edo forward.

“On a specific note, I want to use this occasion to call on former National chairman of the APC Adams Oshiomhole that the fight is over, to come and join in building the house where he was part of laying the foundation. We have no malice; the only thing we disagreed on is on the approach in moving Edo forward,’’ he said.

Furthermore, Obaseki commended the INEC’s National Chairman, Prof. Mahmood Yakubu, for his steadfastness and ability to withstand pressure, adding that using his intellect in introducing technology for the election should be hailed by all.

“Despite all the criticisms, the ability of INEC to view results as the counting is taking place in polling units is one innovation we will implore INEC to maintain and improve on. Because it has introduced different elements of transparency in the way we conduct election in Nigeria,’’ he said.

Presenting certificates of return to both the governor-elect and the deputy governor-elect, The INEC National Commissioner in charge of Edo, Bayelsa, and Rivers, May Agbamuche-Mbu, said that the presentation of the CORs was a statutory obligation of the commission which must be carried out within seven days after its declaration of a winner.

“This occasion is only made possible because of the successful conduct of the governorship election last Saturday, Sept. 19. INEC, I believe, has played its humble part but we have always maintained that a successfully conducted election is a collective effort, and so it has proven to be,” she said.