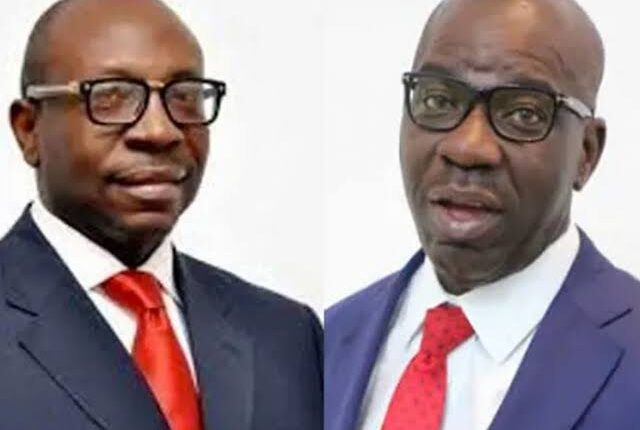 Ahead of next Saturday’s governorship election in Edo State, the candidate of the Peoples Democratic Party (PDP), Godwin Obaseki, and governorship candidate of the All Progressives Congress (APC), Osagie Ize-Iyamu, have differed on job creation, health, and other sectors that could spur development of the state.

Obaseki said that within his four-year tenure, his administration had taken over 200,000 residents off the street and engaged them to boost Edo Gross Domestic Product (GDP), but Ize-Iyamu argued that his PDP counterpart, the current governor, was misrepresenting appointments with job creation for the unemployed youths in the state.

They spoke at a debate on Sunday organised by a national television station in partnership with the Broadcasting Organisation of Nigeria (BON) and agreed that level of insecurity in the country particularly in the state required quick creation of state police to address high rate of kidnapping and other sundry crime cases in the state.

Addressing the audience, the APC candidate alleged that the governor was getting the facts wrong and that he had been brandishing the false claims at different campaigns in the state.

He said: “I am sure he is not going to misplace the appointments he is making now as jobs,” Ize-Iyamu said during the debate in Benin City. I know in the past one month, he has appointed over 2,000 people as SSA s on social media and the rest of them.

“Those are not jobs. When you say that you have created jobs, in what area? We know for example that there is a glaring vacancy in the teaching profession and every school we went to, they practically had no teacher”.

The governor, while defending his performance in the area of human capital development, stated that over 150, 000 persons were already employed by his administration

According to him, at the onset, I promised to create a minimum of 200,000 jobs within a four-year period. Just before COVID-19, we had created both direct and indirect jobs for Edo people as much as 157,000 jobs”.

Countering Obaseki’s claim, the APC candidate argued that the numbers were not true and if it was as the governor claimed, the state economy should have recorded significantly boost since theed the state’s economy.

“If it is true that we are able to have the number of jobs that the Edo State governor claims, our IGR will not be where it is. There will be a significant leap,” he added.

On health, Ize-Iyamu argued that the sector had been allegedly left unaddressed by the governor and that the negligence was responsible for the challenges confronting the sector in the state.

The APC candidate added that the state School of Nursing which had earn the state recognition had been shutdown by the Obaseki led administration and if the school had been functioning, the state would have not be confronted with dearth of health workers and other facilities.

Responding, the governor disclosed that aside from the huge investment his administration had done in the health sector, atleast three private specialist hospitals have indicated interest to establish their outfit in the state to boost healthcare standard in Edo.

In the education sector, Obaseki argued that the policies introduced under his administration was responsible for the improvements recorded in the sector particularly in primary education.

While Obaseki argued that he had raise the bar in education above where it was in 2016, his opponent faulted the claim and stated that the learning was better than where it was when he assumed office and that teachers were not trained to delivered on needed goal.

Both candidates, however, said that level of insecurity in the state could only be addressed with a formidable and well structure state police.

The APC candidate, who doused the fears that they could turn violent in future, stressed that he would ensure a proper coordination to ensure the personnel provide essential services which the paramilitary was established for.

Also, Obaseki I formed that he had submitted request to the Inspector General of Police, Adamu Muhammad, for onward consideration of the state for creation of a state police force.

LASG to set up air control stations, other pollution strategies