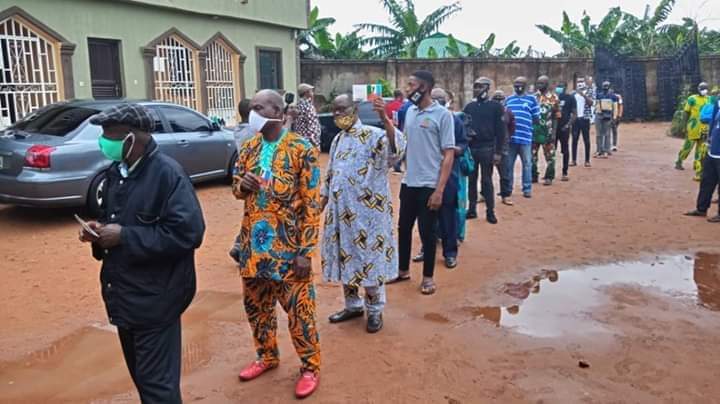 The Edo State Governor, Godwin Obaseki, has faulted the Independent card readers after exercising his franchise during the gubernatorial election processes.

Obaseki said he surprised and shocked at the slowness of card readers after he cast his vote in the Governorship poll being held in the state.

“Today, the card readers were very slow and that is the situation across most high-voting population centers in Oredo from the reports I’ve gotten till now. For me, that’s a bit worrying.

“If I, as Governor, could stand in the queue for more than one and a half hour to cast my vote, you can imagine what other people are going through across major voting centers in Oredo.'” he lamented.

He said such a glitch is being experienced after the Independent National Electoral Commission (INEC) had given assurances that such problems would be avoided.

Gov. Obaseki, who is standing for re-election with the candidate of the APC, Osagie Ize-Iyamu his closest challenger, opined that INEC should have been better much organised, as this is capable of disrupting election processes.

Meanwhile, there was peaceful massive voters’ turnout in most wards across the state with different security agencies on ground to maintain peace and order.

As of when the report was filed, the situation does not suggest the likelihood of violence as a result of stringent warnings and appeals from different stakeholders, particularly, from the body saddled with the responsibility of conducting the election.

It was gathered that residents were seen complying with the rules and protocols guiding COVID-19, as mapped out by members of the Nigeria Center for Disease Control(NCDC), and massive security presence in cities, towns, and villages to enforce such rules on defaulters.

With total compliance with restriction movement across the state, the processes of making the election peaceful and credible are uninterrupted.

Again, there were no hiccups whatsoever to delay voters from going to their polling units for accreditation, as major streets, especially in Benin witnessed the free flow of traffic.

However, in other areas of Edo, such as Uzzebba, Igueben, Auchi, Ososo, Ekpoma, Jattu, and Ughoton, among other towns and villages, say there are impressive turnout and orderly situation. Edo has 193 wards with 18 local government areas.

In most polling units, security operatives arrived in their duty points to enforce a restriction on the movement of people and vehicles during the election.

Newsmen reported security operatives were present as early as 6 a.m. in strategic locations in the city centers of the three senatorial districts of Edo South, Central, and North.

Similarly, in Ekpoma, Iruepken in Edo Central, Okepella, Jattu junction, and Agbede in Edo North, the situation was not in any way different from what was earlier reported.