Court threatens to strike out EFCC’s suit against…

Shooting Stars of Ibadan and issues ahead NPFL new season 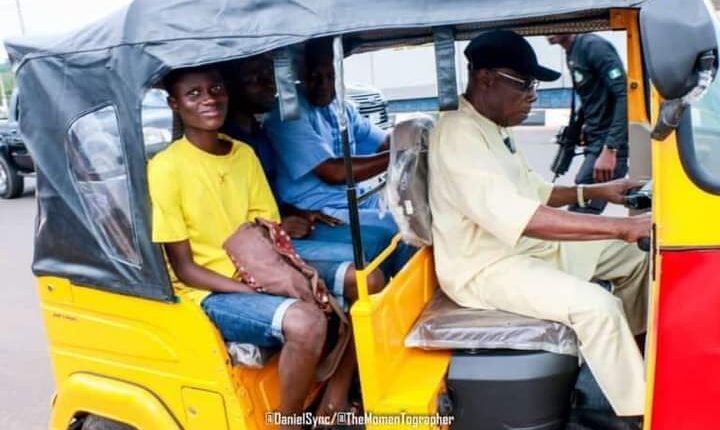 A former President, Olusegun Obasanjo, has practically become a commercial tricycle operator in Abeokuta, Ogun State capital, to demonstrate the safety of the means of transportation and encourage youths on importance of hardwork and dedication to whatever they embrace.

The ride, which took the former President from his Pent House residence at the Olusegun Obasanjo Presidential Library (OOPL), through Kuto under bridge, was done amidst greetings and jubilation by shocked onlookers along the road.

In a statement by his Special Assistant on Media, Kehinde Akinyemi, on Saturday, the onlookers expressed surprise at the former president riding the keke, a reaction Obasanjo said was fuelled by wrongful societal classification of all keke riders as miscreants and the tendency of young people avoiding the virtue of starting small business.

The former president, along the route, stopped and picked a male passenger to demonstrate that riding in the tricycle is safe, if used properly and for the youths to learn how to start small and grow their craft.

Speaking after returning to the OOPL premises, Obasanjo said he embarked on riding the Keke to demonstrate to the people that there was not` nothing bad in riding the Keke and using same for commercial purpose.

He said with tricycles and other small scale businesses, youths can be self employed and ultimately, become economically independent.

Obasanjo added that, when 85 Keke given young people across the nation, he received some feedback that made riding tricycle look as an inappropriate gift, even as some wondered if that was the best for young people.

Obasanjo said he had remained committed to the economic empowerment of young people through initiatives that can generate employment. This is how we csn increasingly address unemployment in Nigeria.