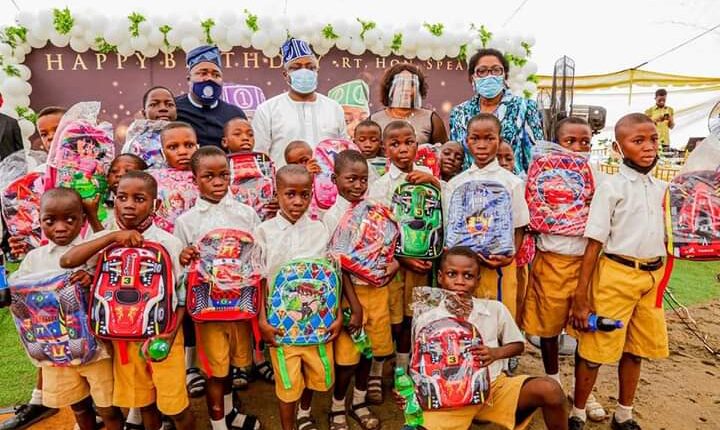 It was a big day for the quintessential politician whose robust leadership style and mature handling of proceedings at the state Assembly have promoted harmonious relationship between the executive and the legislature.

Ordinarily, Obasa, like on many other ocassions, would want a low-key celebration. But that of this year was exceptional. It was a year with unexpected events. As thus, it should also be a year to boost his relationship with the people, especially children, become a sort of mentor to some of them, who aspire to be the best of the future. The grassroots mobilizer and lover of youths also needed to use the opportunity to encourage the young and growing politicians in parts of Lagos.

On this day, countless number of encomiums and panegyrics were also poured on him by prominent Nigerians from far and wide.
Since his entry into the political scene in 1999 as a councilor in Agege Local Government Area of Lagos State, his growth as a key figure in the political calculus of Lagos and ascension to number three position in order of ranking in the state has been quite astonishing and inspiring to many.

Aside from this, his name has become synonymous with numerous humanitarian gestures enjoyed by his people. He has never left them like the average Nigerian politician is wont to do. Despite being the Speaker, he has remained in the midst of his people.
His job? He handles with expertise; he has carved a niche for himself concerning his sterling capacity to steer the wheel of leadership in the hallowed chamber.

As chairman of the Conference of Speakers of State Legislatures in Nigeria, a position he held until recently when his tenure ended, Obasa led what was acclaimed the most vibrant tenure of the Conference having inputs in matters of national interest.

His tenure saw a push for financial autonomy for state legislatures and the judiciary. Recall that President Buhari, on May 22, 2020, signed Executive Order 10 for the implementation of the financial autonomy after a committee report concerning the issue was handed over to him.

As a grassroots mobilizer, Obasa was able to use his exemplary leadership style to convince the eight Peoples Democratic Party lawmakers who were elected into the 40-member Lagos Assembly in the 2015 general elections to defect into the ruling All Progressives Congress in 2017.

While six of the lawmakers defected on February 16, 2017, Akande, the seventh, moved on July 10 same year.
As a lover of youths, Lagos State Assembly under the leadership of Obasa held an emergency plenary session to address the #EndSARS protest that rock the state and the nation at large. It was on record that Lagos was the only assembly that held such session in the whole of the country.

The protest started on Wednesday, October 7, 2020, with youths seeking the dissolution of the SARS unit of the Nigeria Police Force over cases of harassment and extortion by its personnel.

The Nigerian youth in continuation of their protest on Thursday besiege the State Assembly overnight and were addressed by the Speaker who assured them that their grievance will be addressed at the emergency Friday plenary.

The emergency sitting was presided over by Obasa and it had in attendance 15 representatives of the youths.
During the sitting, the lawmakers called on the Federal Government to put an end to the harassment, extortion, and intimidation of Nigerians by the operatives of the Federal Special Anti-Robbery Squad.

They also called on the Commissioner of Police in Lagos State, Hakeem Odumosu, to provide protection for the protesters, while they express their grievances.

Among the seven-point resolution passed after an extensive deliberation was that the Senate and the House of Representatives should carry out a probe of the allegations against F-SARS including killing, maiming, and dehumanising of Nigerians.

The House resolved that the Commissioner of Police in Lagos State should protect End-SARS Protesters in the state and ensure that they are not molested and that he should stop unwarranted molestation of the youths by the FSARS and its counterparts in the State.

They demanded that the Senate President and the Speaker of the Federal House of Representatives should institute a public inquiry on the extra-judicial activities, killings, maiming, and dehumanisation of the youths by the Anti- Robbery Squad; and ensure that the victims are duly compensated while erring officers sanctioned appropriately.

“SARS should be proscribed and a new security outfit which will be more efficient with clearly spelt out code of conduct and rule of engagements be established while sanction is imposed for the misdemeanour. Mr. President should ensure that culpable officials of SARS receive the punishment as prescribed by the National Assembly,” the lawmakers stated in their resolution.

The Assembly also directed its Committee on Judiciary, Human Rights and Public Petitions to “liaise with the Commissioner of Police and Attorney General of the State to fashion out ways and means to address allegations of ruthlessness and extrajudicial killings contained in the petition against SARS in the state.”

The Governor of Lagos State, Mr Babajide Sanwo-Olu, was urged to engage relevant institutions “to protect lives and property in the state such that phones, laptops and other means of communication belonging to youths are not confiscated indiscriminately without a warrant.”

Obasa sure understands what Lagos desires at every point in its current journey. He has overcome waves leading his colleagues to achieve this.

On his birthday, he visited St. Thomas Aquinas School, Mushin and the State Primary School in the Oyewole, Agege. These are his alma mater in Lagos where he told the pupils parts of his grass to grace story.

Speaking with the pupils at St. Thomas Aquinas School, he said: ”I started off like you all and you are indeed the future we rely on. Do not let anything deter you. I am of a humble background; I struggled through life and today, I am the Speaker of Lagos State. “You can be a governor, a Speaker, a doctor a lawyer, an engineer, a great footballer or anything you want to be in life.”

The Speaker, who took a tour around the school, promised to assist in renovating the parts that need facelift just as he thanked the teachers for their efforts at bringing up kids in the school despite the various challenges they face in the course of their jobs.

To the pupils of the State Primary School, Agege, Obasa said: ”When I was in this school as a child, I never had the opportunity of meeting a dignitary or had anyone from government visit us. Today, I chose to visit you so you will have your priority set right, and your dreams aligned. You all can be great. You all can be successful beyond my achievements as the Speaker of Lagos State.”
Undoubtedly, the students were inspired.

Jamiu Yisa, Personal Assistant to the Speaker on New Media wrote from Lagos.