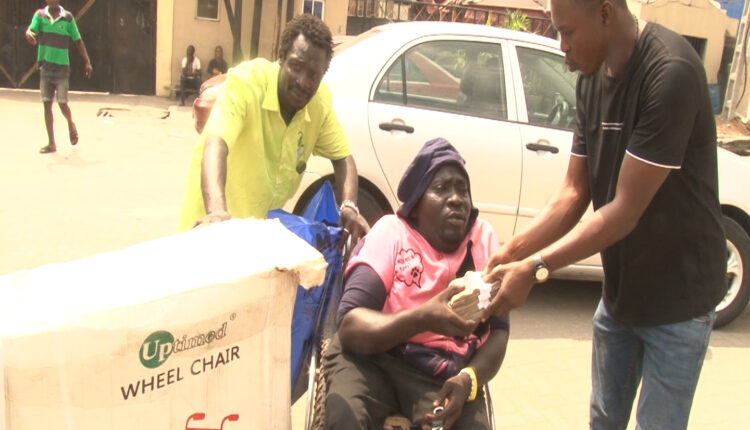 The Nigerian Super Eagles former striker, Obafemi Martins, has donated a wheelchair and N200,000 to a physically challenged voluntary traffic warden, Abiola Olu, who had chosen not to be held-back by his predicament in Lagos State

The gesture, which was handed over to Olu by a representative from the national team former striker foundation, Obafemi Martins Foundation, was said to be in line with the footballer’s commitment towards giving back to the society, particularly the less privileged.

The 36-year-old forward who recently joined a Chinese club side, Wuhan Hall, said that his donation followed a short documentary of the voluntary warden he viewed online that chronicles his journey in life and day-to-day activities to ensure Lagos economy thrive.

He disclosed that the short documentary he saw online showed his commitment to assist in easing traffic on Lagos roads evoked his spirit of philanthropy that led to to his gestures, the donation of N200,000 and wheelchair.

Speaking through his representative after presenting the donations to Olu, the striker indicated that the physically challenged man needed Nigerians supports on his child’s education and encouragements such that would give him a sense of belonging in society.

According to him, the gesture would aid Olu’s efforts in settling bills that have to do with the child’s education and such support will relieve him from some financial burden.

Martins who had 42 caps for the Nigerian national team and featured for the team at the 2010 World Cup in South Africa, urged other good spirited Nigerians to support the less privileged around them, particularly as the festive season approaches.

He further urged the Lagos State government to support Olu by coming to his aid and engage him as a volunteer to state’s Traffic Management Agency (LASTMA).

The Inter Milan former top striker urged Nigerians to reach out to the less privileged with a helping hands and that economic effects of COVID-19 on 2020 were enough evidence to show people in Olu’s condition kindness.

Martins, through a personal video message he recorded and sent to Olu, hinted that plans were underway to meet with the physically challenged warden and work out modalities on areas he could contribute to his child’s education.

“Mr. Abiola alias Biggie, I saw your video and I decided to donate a wheelchair and support you with N200,000 and I hope you will like it. I hope to see you soon and all the best to you,” he said.

Responding to the gesture, Olu, who could not hide his excitement, said that the donation was God’s way of putting smile on his face as he had been contemplating to replace his old wheelchair, which he said, had outlived its purpose.

While thanking the footballer for his kind gesture, Olu disclosed that the cash would be used in sorting his child’s school fee and enable him take care of the son, whom he described as his lifeline