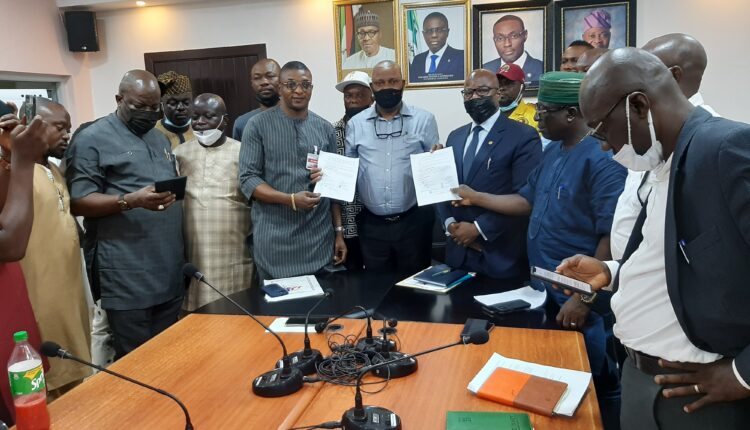 In a bid to ensure peace reign across Lagos motor parks, leaders of transport unions, National Union of Road Transport Workers (NURTW), and Road Transport Employers Association of Nigeria (RTEAN) have signed a peace accord to end the face-off over park operations across the state particularly in Obalende.

Both parties, during the peace accord, agreed to often deliberate and take proactive measures at resolving issues immediately they ensued to ensure peace and harmony reign in the transportation sector rather than degenerating into clashes.

They also agreed that to prevent another face-off in Obalende, pending the return of Tricycle operations by NURTW at Obalende, RTEAN would continue with the operation of their mini-busses with welfare fees paid to NURTW.

At the peace agreement coordinated yesterday by the Ministry of Transportation, both transportation unions agreed to abide by the content of the agreements signed to prevent a breakdown of law and order.

The signing was supervised by the Special Adviser to the Governor on Transportation, Oluwatoyin Fayinka, the Permanent Secretary, Ministry of Transportation, Kamar Olowoshago, Director, Transport Operations, Abdulafiz Toriola while the Vice-Chairman, NURTW, Bankole Seyi, and State Secretary RTEAN,  Amusan Olalekan represented the unions at the signing ceremony.

Earlier, Fayinka noted that the clash recorded at Obalende axis of Lagos was worrisome considering that both parties had cohabited peacefully for a long time, hence the need for an immediate resolution to forestall a reoccurrence across the state.

Fayinka, therefore, implored the two parties to make necessary concessions and agree to enhance the peaceful resolution of their differences and ensure that peace reigns across parks in Lagos State.

Responding, the Lagos State Branch Treasurer for NURTW, Mustapha Adekunle, also known as, Sego, stated that the disagreement was centered on park operational control as earlier agreed by both unions, explaining that the operation of tricycles in one of the Units under the control of RTEAN was allegedly disrupted by NURTW for their mini-bus operations within the axis.

Corroborating the Treasurer’s claim, the State Chairman, NURTW, Musiliu Akinsanya popularly called MC Oluomo, added that the boundary operations crisis that ensued between the unions could have been averted like others in the past that could have degenerated into crisis but were addressed amicably.

He, therefore, reiterated the need for the peaceful coexistence of both parties in Lagos State, suggesting a periodic meeting of stakeholders of NURTW and RTEAN to resolve areas of disagreements before it degenerates in order for peace to reign.

On his part, the State Secretary of RTEAN, Amusan, maintained that the clash was avoidable going by the agreement of both Unions in maintaining the peace between them, noting that the crisis would have been averted if Union Leaders of both parties had taken proactive measures at resolving issues immediately they ensued.

The Vice-Chairman, Lagos State Chapter of RTEAN, Gbenga Elesho, however, informed that the taking over of some parks, which were initially under the control of his union, by NURTW was one of the reasons for the clash.