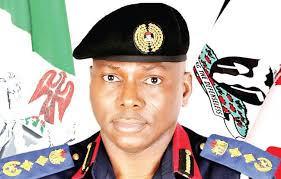 The Commandant General of the Nigeria Security and Civil Defence Corps (NSCDC), Ahmed Audi, has cautioned the over 2000 corps personnel against intimidation and harassment of voters during Anambra gubernatorial poll.

Audi said that the personnel should endeavour to be civil in their interaction with the electorates and avoid the use of excessive force and molestation of voters during the exercise.

the NSCDC boss stated that duties of the law enforcement officers during the election on Saturday, November 6, 2021 was to protect lives and property of all citizens irrespective of their political affinity

Through a statement released on Friday by the Director for Public Relations, NSCDC, Olusola Odumosu, the Commandant charged the corps to perform their duties professionally.

He assured the personnel deployed for the election and others on separate duties that their welfare and safety would always be catered for by the Federal Government.

According to him, the essence of their welfare is to encourage them to shun all means of corruption and compromise which might tarnish the hard-earned reputation and integrity of the Corps.

“What is due to ceaser must be given to ceaser and the era of monkey dey work, baboon dey chop is over under my administration, the CG said.

He expressed his utmost confidence in INEC’s preparedness and other stakeholders involved in the electioneering process, just as, he reassured them of utmost protection for their staff and other electoral materials deployed for the exercise.

Audi, meanwhile, appealed to all citizens to be law abiding, embrace peace and eschew violence as well as any conduct that could jeopardize the democratic process during and after the election.