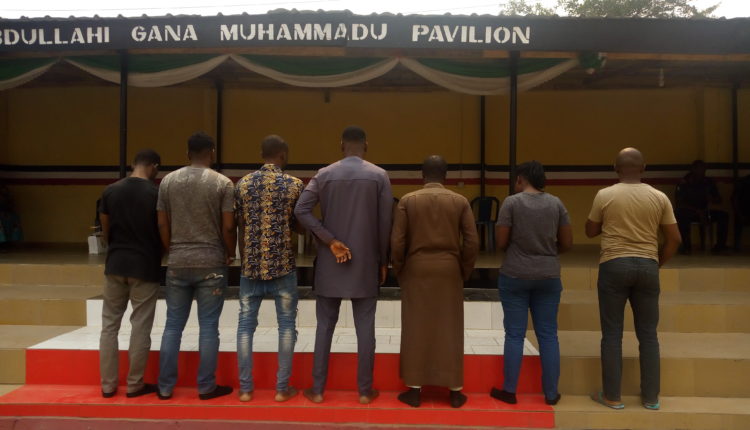 Nigerian Safety and Civil Defense Corps (NSCDC) Lagos Command, has paraded eight suspects that allegedly extort applicants of Joint Admissions and Matriculations Board (JAMB), selling the examination form at a price higher than stipulated benchmark by the matriculation body.

The suspects were paraded on Monday after extorting a lady were Oluwaseun Bamiro (20), Adewale Subair (40), Segun Oshikoya, Oluwafemi Ajetumobi (28), Oluwashina Olayinka, Elvis Okorafor, Luckson Igwoku (42) and the only lady in their midst, Faith Victor (20).

It was gathered that JAMB had instructed its examination forms be sold at accredited Computer Based Test (CBT) centers within Nigeria, and specified that each form should be sold at N4,700 which included N3,500 for E-Pin, N500 for reading test and a N700 commission per applicant for the CBT center management.

According to Oluwaseun, owner of the business center where the lady bought the forms and he had explained to her that though he does not sell forms, he could help procure from a CBT center and charge extra fees for transportation and logistics.

Oluwafemi Ajetumobi had introduced himself to The Guild as a trained and licensed educational consultant who had been part of several educational programmes like the then Federal Government N-Power programme.

Ajetumobi, one of suspects, had protested innocence, stating that he was owner of Achiever’s Educare, a popular tutorial center at Ejigbo axis of the state and that his establishment boldly listed its charges which included transportation to and from CBT centers, a professional fee for consultation, guidance, and training on how to take CBT examinations.

“I have run this tutorial center successfully for four years and have made quite a name for myself due to my diligence, hard work and drive for success for my students,”

“I do not sell forms at my tutorial centre, but having almost 100 students who want to apply for JAMB, based on trust most parents insist that I help their wards, also, many applicants make mistakes while filling the form or answering questions. These mistakes may seem small but they can cause a lot of problems for the candidate,”

“As such, I offer other services. I have a bus to transport candidates to and fro, I train using the approved template on how the forms should be filled to avoid errors and also training on CBT exams to help candidates familiarize themselves with the process, I also consult on appropriate subject choice necessary for intended course of study.

“All these form extra charges which are entirely optional and both parents and candidates know what they are paying for and why”.

The corps Commandant, Cyprian Otoibhi, while parading the suspects explained that Lagos command had acted on credible information and done due diligence by having a ghost shopper buy forms from suspects, to confirm claims of extortion before arrests were made.

Otoibhi stated that each of the suspects, rather than sell JAMB forms at a stipulated price of N4,700,  sold as high at N8000 each to examinations candidates who bought at their establishments, an act which contravenes the law.

He further revealed that business centers and tutorial centers were not even approved by JAMB or the government to sell examination forms and as such, their actions were wrong, criminal and punishable by law.

Otoibhi said, “The government had done its best to reduce fees for the upcoming JAMB exams so that more applicants will be able to participate in it,”

“It is, therefore, a clear case of extortion for these suspects, as well as many others like them, to manipulate candidates to pay sums of money higher than the stipulated amount for the examination forms”.

Otoibhi, when asked for his opinion on claims made by suspects, explained that receipts issued by such establishments should have reflected that payment had been made for different services

“When a receipt is issued for JAMB form, which is supposed to be N4,700, at N8,000 one can clearly see that the applicant had been overcharged, but, in the case of extra charges for other professional services, a separate receipt should have been issued to avoid any sort of misunderstanding”.

He hinted that investigations were ongoing as the corps intended to make more arrests and prosecute all offenders according to law.

“These are just the first batch, many more are to come. I call on all who also tow this path to cease and desist. They should stop all acts of criminality or get ready to face the legal consequences.

“I also urge the public to give the NSCDC credible information that can be used to locate such as these, and put an end to extortion and all forms of fraud in our society”.