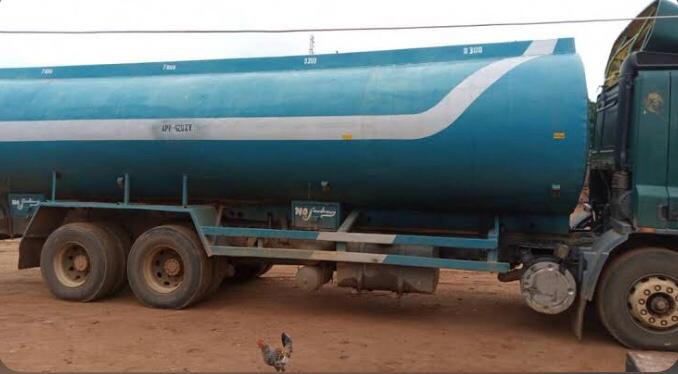 The Nigerian Security and Civil Defense Corps (NSCDC) Oyo command has intercepted a tanker loaded with 33,000 litres of Premium Motor Spirit (PMS) on Kishi-Kaiama highway while been diverted by the driver to Kwara State.

As learnt, the truck with number plate APP 429 XV was intercepted by the Agro rangers team of Oyo command after discovering that the weigh bill presented by the driver was already falsified and was not for interstate.

The Commander of Oyo NSCDC, Michael Adaralewa, who announced the interception on Sunday, stated that the truck had been impounded at the Kishi Divisional office pending completion of the investigation into the product and the owner.

Adaralew, in a statement made available to newsmen, added that the command would not tolerate any form of criminality and warned Nigerians against illegal transactions and diversion of petroleum products, saying anyone arrested will be prosecuted in accordance with the law.

He, meanwhile, cautioned residents against selling petroleum products including AGO and PMS in residential buildings to desist particularly in Ibadan, Oyo State to stop the act, noting it’s better to change and do the right thing than to get caught and go to jail,” he said.